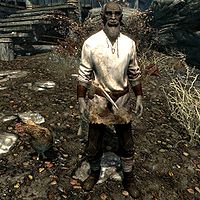 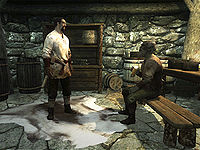 "All I'm asking is that you clean up once in a while."

Grogmar gro-Burzag is an Orc miner that lives at Shor's Stone. He lives with fellow miner Odfel and will buy iron ore from you. He states he has been a miner his entire life and can smell ore. Like most Orcs he seems hardened, but never really unfriendly. He will act warmly towards you after you clear the mine.

Grogmar starts off his day by waking up at 5am and spending two hours resting in Odfel's house. At 7am, he heads off to Redbelly Mine to start work. He works at the mine for most of the day, tirelessly mining for eleven solid hours. At 6pm, he finally stops working and goes home to rest for an hour. At 7pm, he goes to the campfire in the middle of town. He spends four hours sitting around the fireplace and sometimes using the cooking pot. At 11pm, he heads back home to sleep for six hours, and repeats his schedule the following day.

Grogmar wears a set of miner's clothes along with a pair of boots. He carries a pickaxe, a belted tunic, a key to Odfel's house, and a selection of common loot and gold.

"You're looking at the best miner in Skyrim."
"I'd wager I could crack rock faster than anyone. Even you."
"Takes a lot of strength to swing a pick axe, know what I mean?"
"Aye, I see the look you're giving me. Don't worry, I won't bite."

After you take care of the spiders in the mine, he will be quite happy and tell you:

"Ha! You showed those spiders a thing or two!"

If you ask him to tell you about the mine:

Tell me about the mine.
"Damn place is filled with this reddish mist. Can't see more than ten feet in front of your face. But when you can sniff out a vein of iron like me, it isn't too much trouble."

He will end conversation with you by stating:

"May the road favor the foolish..."

An unholy alliance, Odfel and Grogmar has literally divided the small house into two halves and spends all of their time arguing about who cleans up the most, at times even betting about it:

Odfel: "All I'm asking is that you clean up once in a while. How you can find anything in your half of the place is beyond me."
Grogmar: "I'd rather spend more time in the mine hauling up iron then doing woman's work keeping the house clean."
Odfel: "I'll have you know I can haul up just as much iron as you in a day and still manage to clean up my messes."
Grogmar: "You think so, huh? Maybe you'd like to put some septims behind that boast."
Odfel: "You have yourself a bet."

He can have a conversation with Filnjar:

Grogmar: "I've been cracking rock ever since I've been able to hold a pickaxe and I'm telling you, this mine is drying up."
Filnjar: "And I'm telling you, you're wrong."
Grogmar: "What makes you so sure? What if I'm right?"
Filnjar: "I know there's ore still in there, I can smell it. You think you're right, you can pack up and leave any time you like."

He can have a conversation with Sylgja:

Grogmar: "I've been watching the way you mine and I have to say, I'm very impressed."
Sylgja: "I owe it all to my father who started me swinging the pickaxe when I was a barefoot little girl."
Grogmar: "Well, it shows. Your skill rivals some of the greatest miners I've known."
Sylgja: "Thank you. It's nice to know someone admires me for more than just my appearance."