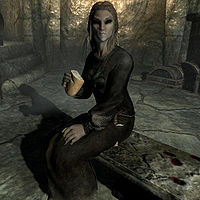 During and after the banquet she will switch between eating or just pacing around the dining hall.

In addition to the gear listed above, she also has a small chance to carry potions, poisons, soul gems (including a higher chance for black soul gems above level 20), Novice or Apprentice level spell tomes, ingredients (common, uncommon, or rare), recipes, and a small amount of gold.

During The Taste of Death, she may comment on the food, saying, "You've brought us quite the meal." or "I love this part of the meal."

After the quest, Nimphaneth will greet you with, "It's an honor, Keeper of the Ring."