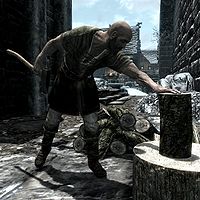 Nils owns a room inside Candlehearth Hall, on the ground floor, and sleeps there every night between 10pm and 8am. Immediately after waking up, he spends two hours with his axe on the wood chopping block near the market. At 10am he carries the chopped wood all the way to the Gray Quarter and unloads it in front of Sadri's Used Wares. At noon he once again chops wood, and at 2pm he carries the wood to the forge outside the Blacksmith Quarters. At 4pm he finally enters Candlehearth Hall and will spend the rest of his day in the kitchen area, cooking, relaxing, or wandering around.

Nils wears a set of farm clothes along with a pair of boots. He wields an iron dagger and carries a selection of common loot and gold.

When meeting Nils, he will introduce himself by saying: "Name's Nils, I'm the cook at Candlehearth Hall." He will then provide you with a piece of advice about firewood: "Can't just throw the big logs on the fire. Got to have the little bits, too." He will also quickly reveal to you his opinion of the Imperial Legion: "When I'm cutting wood, I pretend there's an Imperial soldier's head on the stump."