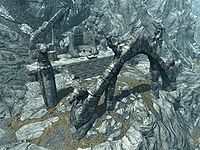 Lost Tongue Overlook is a dragon lair in the Jerall Mountains south of Riften. Its word wall teaches part of the Dismay shout. 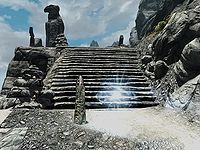 The path to the lair is a short way past Snow-Shod Farm going south from Riften. It wends its way around before reaching a fork in the path; taking the left-hand path takes you past a dragon mound. Several flights of stairs lead up to the lair. (The path continues past here and passes Crystaldrift Cave before making a full loop.) By the start of the stairs is the first of several piles of rocks marking the route. Up two flights of stairs, you'll find a fire rune on a stone semiarch to your right, which can be easily avoided by moving left. After moving up another flight of stairs, you'll find a switchback in the path with an iron ore vein. Two flights up, there is a spellcaster trap on your left that unleashes the Ice Storm spell when triggered. It is possible to climb nearly to the top of the stairs and snipe the soul gem from the pillar with an arrow. This will deactivate it. Alternatively, you can try going left around the stone and approaching it from behind. The next flight of stairs brings you to a plateau. There are a few stone pillars and arches which are remnants of the structure that once stood there. The word wall lies just east-southeast from the plateau. 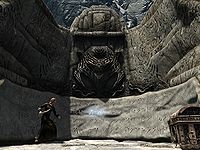 Before the dragons' return a skeleton will be creaking along the stairs next to the iron ore vein. On the plateau, there are two skeletons who will attack on sight. Near the word wall is a leveled boss necromancer and an altar with a lootable skeleton, leveled potion, soul gem and The Book of Daedra on its top. The necromancer's tent just to the west contains a bedroll and a table with a plate, grilled leeks, necromancer robes, and a staff on it. There is an open cage holding a dead Breton and an ash pile to the east.

After the dragons' return, a burnt carriage will be found near the entrance path below. On the plateau are a couple of burnt corpses that can be looted for a few septims or a sample of bone meal. If the leveled dragon hasn't detected you yet, it will be resting atop the wall.

Regardless of whether Dragon Rising has been completed, the boss chest is next to the word wall.