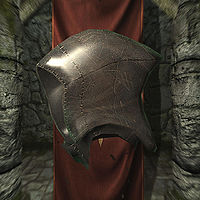 Linwe's Hood is the headwear for the unique set of equipment used by the leader of the Summerset Shadows, Linwe. Alongside this item, this set of equipment also includes armor, a pair of boots, and a gloves. As Linwe runs an organization that rivals the Thieves Guild, his equipment has some visual similarities to the versions used by the Thieves Guild. However, his hood is the exception to the rest of the equipment. While a Thieves Guild Hood is a brown and rounded at the corners, this hood has much sharper appearance, is more patchwork than the Thieves Guild version, and is also gray. Additionally, while his hood weighs half a unit more than the Thieves Guild Hood, it also provides an additional three points of armor, as well as being slightly more valuable. The armor is enchanted to fortify Archery attacks by fifteen points. Tempering Linwe's Hood requires a piece of leather and the Arcane Blacksmith perk.