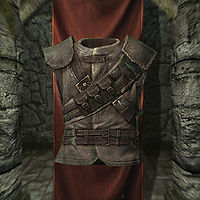 Linwe's Armor is the chest piece of the unique set of equipment used by the leader of the Summerset Shadows, Linwe. Alongside this item, this set of equipment also includes a pair of boots, gloves, and a hood. As Linwe runs an organization that rivals the Thieves Guild, his equipment has some visual similarities to the versions used by the Thieves Guild. Compared to Thieves Guild Armor, Linwe's Armor is grayer in color, but also sleeveless. Additionally, while it weighs one more unit than the Thieves Guild Armor, it also provides an additional two points of armor. However, its gold value is significantly lower. Besides that, the basic designs are the same. The armor is enchanted to fortify stamina by fifteen points. Tempering Linwe's Armor requires a piece of leather and the Arcane Blacksmith perk.