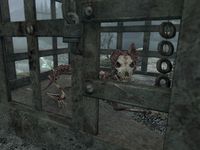 Upon installing the Bone Wolf Creation, a letter from Bolgeir Bearclaw will be added to your inventory. After reading the note, you will be directed to a rocky overhang located along the coast northwest of Folgunthur, just across the bay from the Solitude docks. A hostile necromancer has set up camp underneath the outcrop. His camp is guarded by two hostile thrall wolves, and werewolf pelts can be found scattered all over. The necromancer will also likely resurrect the nearby dead wolf, so be prepared to face multiple enemies.

Once you have defeated the hostiles, search the necromancer to obtain his journal, along with a key and a bloody Totem Bone. The key can be used to unlock the nearby cage, which contains a non-hostile Bone Wolf. The necromancer had not yet completed the ritual to bind the wolf to his will, and it will be quite happy to have its bone back.

The quest will then conclude, and you can ask the Bone Wolf to follow you. It serves as a pet, meaning it will not fight enemies but can be used to carry items. While following you, the Bone Wolf will grant you a perk buffing the damage you do to undead enemies. It can also be told to wait at a city, wait at its current location (either temporarily or permanently), or wait at your house.