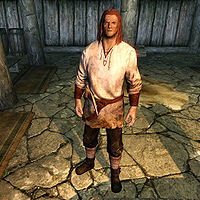 Kjeld the Younger is a Nord warrior living at Braidwood Inn in Kynesgrove. His parents, Iddra and Kjeld, manage the inn, as well as nearby Steamscorch Mine.

While the other miners sleep in the camp outside, Kjeld shares a room with his father at the Braidwood Inn where he sleeps every night between midnight and 7am. After a one-hour breakfast he enters the mine and spends eleven hours hacking away at the malachite ore, interrupted only by one-hour meals at noon and 6pm. At 7pm he spends a bit of time with the other miners in the camp before entering the inn for his bed at midnight.

He wears miner's clothes and a pair of boots. He uses a pickaxe in combat, and carries a spare iron dagger as well as lower class items and gold.

The younger Kjeld is rather cocky, and will often brag that he can beat you in a fight, saying, "You don't look so tough. I'll bet I could take you." although there is no option to brawl with him. He may rudely brush you off saying: "I've never seen you before. Leave me alone!" or "Why are you still here?" He may also warn you: "My pa runs this town, and you're going to be in big trouble if you mess with me." 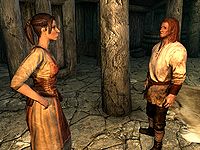 "I'm going to need your help in the kitchen tomorrow." 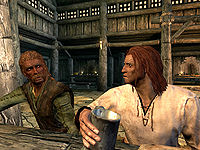 In the following conversation, Kjeld the Younger's dialogue is incorrectly attributed to his father and vice-versa.