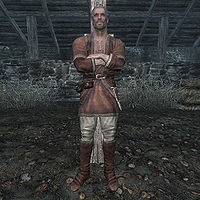 Hofgrir Horse-Crusher is a Nord warrior and the owner of Riften Stables, which he runs with his assistant Shadr. He gained his name following an incident in his youth, during which he got drunk and managed to break a young horse's back after trying to mount it. He hasn't ridden since.

Hofgrir's schedule sees him wander around Riften Stables. He will perform random tasks such as eating, sleeping, walking, waiting, and sitting however he sees fit due to a bug.

Hofgrir wears a set of merchant clothes and a pair of boots. He is equipped with a leveled dagger which can be up to elven quality. He carries a key to the stables, and a selection of common loot and gold. 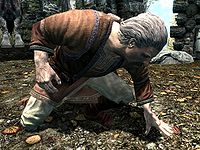 Must be dangerous living outside the walls.
"Bah, I'm not afraid of anything out here. Walls are just a weakling's hiding spot. Now me, I'm no weakling. In fact, I bet I've got the strongest arms in all of Skyrim."
I bet you're wrong.
"Oh! Sounds like I've got a challenger. Tell you what. How about a friendly wager, just between us. I bet you my entire purse of septims I can beat you in a fistfight. You match the bet and we fight until one of us gives in."

Sure, I'll match your bet! (Brawl)
"All right, remember... this is a clean fight. No weapons, no tricks. And none of those fancy magic spells, either. Here we go!" (If you have the gold)
"Well come back when you earn some more so I can take it from you!" (If you don't have the gold)

How about another time?
"I don't blame you. If I were in your shoes, I'd chicken out too. Well, offer still stands if you ever want to have a go."

If you back out of the bet the first time, he may greet you by saying:

After you win the brawl:

"I don't believe it. I guess you were right!"
I hope you aren't angry.
"Not at all. It's good to be put in your place once in a while. I guess I shouldn't boast so much... it gets expensive!"

If you lose the brawl:

"You up for another wager?"
How about a rematch?
"Sure, I don't mind taking some more of your gold. Just let me know when you're ready."

Hofgrir Horse-Crusher is in possession of a Mark of Dibella that he acquired from Haelga. During the quest Caught Red Handed, Svana Far-Shield will ask that you obtain them to embarrass Haelga:

Haelga gave you a Mark of Dibella. I want it.
"Huh? What are you talking about? I don't even know what that is."

You can persuade him to give the mark to you, as long as you have a Speech skill level of more than 25:

Here, brother. Blessings of Mara upon you.
"Had only Mara saved that poor animal..."

"Got horses that need shoeing, so make it quick."
"Too lazy to walk, eh? Well, you've found the right place."
"If it isn't the best brawler in Skyrim. Good to see you again!"

When spoken to directly he can be asked about himself and about his horses:

How did you come to be known as Horse-Crusher?
"Been stuck with the name for years. I've been ridin' horses since I was a lad... nothin' I liked more. But as I got bigger, so did my mounts. Then one day, I was drunker than I've ever been and mounted a poor colt. Broke his back in two. Haven't ridden since."

If you instead change your mind after asking him about acquiring a horse:

On second thought, I'll walk.
"Should have known you'd be a cheap one."

Attempting to purchase a horse when he does not have one for sale:

"If I had one you could. They're all spoken for."