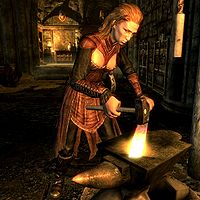 Hestla is a Nord vampire living in Volkihar Keep. She was once part of the Companions, but left because she didn't like their attitude. She claims that while the others were stronger than her, she could now defeat any of them easily. What strength she lacks with her claws she makes up for with her hammer. She looks up to Lord Harkon, and mentions his strength in conversation.

Hestla wears a set of red vampire armor with a matching pair of boots. She is equipped with a leveled one-handed weapon which can be up to elven quality. She carries random leveled bandit loot, as well as a 25% chance of carrying 1-9 gold.

When Lord Harkon asks Serana if she has an Elder Scroll in her possession and she answers, Hestla will respond to the revelation that Serana has returned with a scroll.

Harkon: "My long-lost daughter returns at last. I trust you have my Elder Scroll?"
Serana: "After all these years, that's the first thing you ask me? Yes, I have the scroll."
Hestla: "She has the scroll!"

Her potential greetings are:

"Can you feel it? You're now so much more than you were before. Time was I could barely hold my own in the Companions. Now I could slaughter them all without a second thought. But I'm not half the vampire Lord Harkon is. Truth is I'm better with the forge than I am with claws or fangs."
"Never made it far in the Companions, but now... I'd like to see any of them try and call me "whelp" again."
"If you need anything, say the word. I can still forge a decent blade."
"It's difficult to have a conversation with you like that. Would you mind changing back?" (If you are in the Vampire Lord form)
"Auriel's Bow is ours. Deliver it to Lord Harkon at once, so we can reap the benefits of this prophecy." (During Kindred Judgement)
"You're... you're mortal! What are you doing here like that? Go to Lord Harkon at once, beg him to turn you back. You're dead if you don't." (If cured of vampirism before Kindred Judgement is complete)
"You can't walk around here like some common mortal! Ask Serana to make you one of us again, before someone makes a meal out of you." (If cured of vampirism after Kindred Judgement is complete)

You were in the Companions?
"Aye, I was. Didn't progress very far. Never did care for their attitude, acting like they're better than everyone else. But none of that matters now."

Though her class is simply Vampire, you can get standard Blacksmith merchant services from Hestla, if you have joined the Volkihar vampires against the Dawnguard.