This article is about the NPC in the Abandoned Shack. For the NPC at Nightgate Inn, see Fultheim. 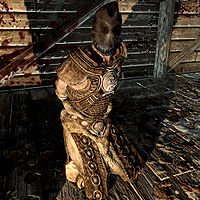 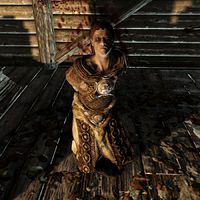 Fultheim the Fearless is one of the three hostages in the With Friends Like These... quest. He is a Nord mercenary who works out of Skyrim. He bears no particular ills against any person, but when asked about his potential assassination, he reasons that as a sellsword, any number of people could have put a contract out on him as he has been proven to be too difficult to kill through battle. When intimidated, he admits to sometimes getting carried away during battle.

Fultheim wears scaled armor, boots, and bracers, along with an execution hood.

Despite his name, he is quite afraid when he is bound up. He begs for his life and insists that he is just a soldier and does his job. He also thinks that somebody would pay to have him killed because he slaughtered sleeping people, which he thought was immoral.

When approached for the first time, he will say, "What did I do? Please, whatever it is, I'm sorry." At other times, he will tell you one of the following: "I... I can hear you talking out there. Please, let me go. I've done nothing to you.", "Is this about that raid last week? I told Holgrim there was no honor in killing sleeping men, but he wouldn't listen! It wasn't my fault, I swear!", "I'm just a soldier. Killing is my job! Surely you can't fault a man for doing his job?" or "Please, oh please, I don't want to die..."

If you kill one of the other captives and talk to Fultheim, he will cry out, "Oh, gods, please! Let me live! I'll do anything you want!"

Asking him who he is will have him answer, "My name is Fultheim. I'm a soldier. Well, mercenary, really. You know, a... a sellsword. I've lived in Skyrim all my life. That's all! I'm a nobody, really. So can't you just let me go?" You may ask him if someone would pay to have him killed, to which he'll reply, "What? Oh gods, I don't want to die..." You have two options:

"Answer me, or die!" (Intimidate)
"Please! I don't know! I mean, I'm a soldier. I've killed people. When I was ordered to. Maybe there were some times... some times I got carried away? But war is war. Right? Nobody could blame me for that. Could they?"
"Shhh... Don't be afraid. You can tell me." (Persuade)
"Okay, well... I guess it's possible. I've been selling my sword arm for years now. Killed a lot of people. Could be someone wanted revenge. But... But you're not going to kill me. Right?"

Upon death, Fultheim will scream, "Aiiiieee!" Astrid meanwhile will comment on his fate, depending on who else has been killed:

"Oh ho. The whimpering Nord, eh? Yes, yes, I can see how you'd come to that conclusion. Interesting choice."
"The timid warrior and the sly Khajiit. Must have been one or the other, right?"
"The blubbering barbarian and the tenacious mother. Must have been one of them, right?"

Should you choose to kill Astrid, you can approach, Fultheim will beg you, "Please! Release me! Cut my bonds!" After doing so, he will be immensely grateful, saying, "Thank you! Thank you! I'll never speak of this to anyone, I promise!" Any time after his release, he can be found repeating his promise: "Thank you! Thank you! I won't tell anyone what happened here, I swear it!"