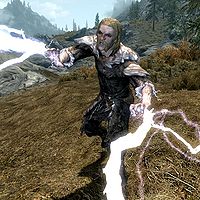 The Challenger is a Breton wizard who is randomly encountered in Skyrim (or SolstheimDB). He wears fur armor and a leveled pair of light boots, and he carries a dagger, along with various potions, poisons, and other items depending on his level.

When you first encounter him, he will call out to you "You call yourself a wizard? I challenge you to a duel!" If you decline the duel, he'll respond "I won't take no for answer!" If you accept by saying "It's your funeral.", he will reply "The gods will be the judge of that." Either way, you're in for a fight.

He expects you to use magic, and if you don't follow his assumed rules of the duel, he may react with these lines:

This Skyrim-related article is a stub. You can help by expanding it.
Retrieved from "https://en.m.uesp.net/w/index.php?title=Skyrim:Challenger&oldid=1539597"
Categories:
Hidden categories: