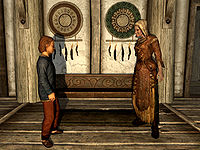 Lars is confronted by his grandmother

Wander around Whiterun and you may hear Lars Battle-Born being picked on by Braith. Speak to Lars and he'll explain that he's being bullied. He'll also offer you his life savings to deal with the problem: "Yes. Braith bullies me all the time. All the elders think I'm a milk drinker 'cause I can't fight. Nobody understands. If you can get Braith to leave me alone, I'll be your best friend... forever! I'll pay you, too! My whole life's savings - two septims!"

Beat Senseless... By a Girl, no Less!Edit

Others will take notice of the boy's distress, and try to speak to Lars, who will be unforthcoming, including Bergritte, who suggests her grandson go play outside:

Bergritte: "Lars, dear, why don't you go outside and play? It's a beautiful day."
Lars: "That's all right, grandmother. I like staying home with you."
Bergritte: "It's that Braith girl again, isn't it? Has she been bothering you again? I've a mind to speak with her mother."
Lars: "No! Please, grandmother, don't do that. I'm fine. Really. Can we just... not talk about this anymore?"
Bergritte: "All right, dear."

Lars' no-nonsense mother, Alfhild Battle-Born, will take a much harder tone, saying: "My boy Lars has been getting beat senseless, and by a girl, no less!"

It seems that these aren't exaggerations - Braith is a child with a serious chip on her shoulder, as illustrated by her treatment of her unfortunate target:

At Lars' request, you can approach Braith and tell her to stop her bullying ways. In order to persuade her, you can tell her:

As harsh as the last choice may seem, all three options lead to the same response. It turns out Braith has liked Lars for quite some time now, and only wanted a kiss. If he had obliged, she wouldn't have had to bully him. Although this may seem like an odd way to treat the boy she wants a kiss from, the blame for this warped behavior does not entirely lie with Braith herself, as she can often be heard asking her parents for advice, to little or no avail: 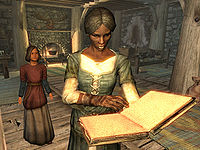 Saffir is too busy to talk

After the quest conclusion, you'll notice that Braith no longer bullies Lars, and in fact keeps her distance from him. Lars will thank you for your help, and Braith will tell you that she has stopped bullying him.