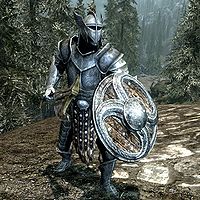 A Bounty Collector can be randomly encountered in the wilderness if you have accumulated a bounty of more than 1000 gold in any hold. Unlike city guards, he will ignore the distinction between holds and will attempt to track you down regardless of which hold you are in. He will demand from you payment equal to 1.2× your current bounty. If you refuse, he will attack.

When he sees you in the wilderness, he will approach you and will tell you not to move: "Stop right there." Asking him what he wants will have him reveal why he is seeking you out: "You have quite the bounty on your head in [hold]. You pay me, and I see that your name is cleared." You will then be able to pay him or say that you don't have the gold. Telling him that you don't have the money will cause him to yell: "Then you are worth more to me dead!" At this point, he becomes hostile and will attack you. If you instead choose to pay off your bounty, he will say: "I will make sure this gets back to the Jarl. Minus my cut, of course. Consider your name cleared, for now." If you speak to him after handing over the gold, he will tell you: "I have no more business with you." or "People think they can run away from their crimes, but I will always catch up with them and make them pay."