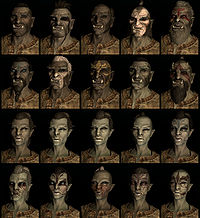 A compilation of the preset Orc faces available in Skyrim

Illustration of a typical Orc male

Orcs, also called Orsimer or "Pariah Folk" in ancient times, are sophisticated, brutish elves of the Wrothgarian Mountains, Dragontail Mountains, Valenwood, and Orsinium (literally translated as "Orc-Town"). They are noted for their unshakable courage in war and their unflinching endurance of hardships. Orcs have elven blood, but are usually considered to be both beastfolk and goblin-ken. In the past, Orcs were widely feared and hated by the other nations and races of Tamriel. However, they have slowly won acceptance in the Empire, in particular for their distinguished service in the Emperor's Legions. Orc armorers are prized for their craftsmanship, and Orc warriors in heavy armor are among the finest front-line troops in the Empire, and are fearsome when using their berserker rage. Orcs have a lifespan similar to that of humans. Most Imperial citizens regard Orc society as rough and cruel. The Orcs of the Iliac Bay region have developed their own language, known as Orcish, and have often had their own kingdom, Orsinium.

The people of the Wrothgarian and Dragontail Mountains, Orcish smiths are prized for their craftsmanship. Orc troops in Heavy Armor are among the finest in the Empire, and are fearsome when using their Berserker Rage.

Bonuses to both one-handed and two-handed weapons allows players to choose their weapon styles early-on, and they receive an early benefit to augmenting their weaponry with bonuses to both Smithing and Enchanting. These combined with a strong bonus to Heavy Armor give Orcs the opportunity to become very fearsome warriors. However, to balance their potency in physical combat, they have no benefits for magic or stealth character builds.

Their Berserker Rage power is extremely useful at all levels, potentially making the difference between life and death at earlier levels against stronger opponents. Because it has no effect on magic, try to save it for combat against tough melee or archery opponents for best results.

Orc players are automatically Blood-Kin to the Orcs of Skyrim, providing them with full access to all Orc Strongholds.