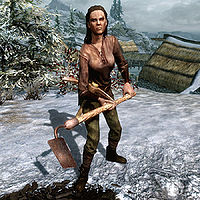 Beitild is a Nord miner who owns Iron-Breaker Mine in Dawnstar. She is married to Leigelf, owner of Quicksilver Mine, though their feud has caused them to live in separate houses. She will pay for any iron ore you dig up, and doing so will increase her disposition towards you. Beitild is also a target of a Dark Brotherhood contract.

She gets up at 6am for a one-hour breakfast, then heads to work in Iron-Breaker Mine, pausing at noon and 7pm for a one-hour lunch. She ends her workday at midnight and goes home for sleep.

She wears a set of miner's clothes and a pair of boots, and is equipped with a pickaxe. She carries a key to her house and a selection of common items and gold.

Like with most targets of the Dark Brotherhood, you may also have a word with Beitild before killing her. She will not be welcoming:

"I'm really not in the mood. State your business, or take your leave."

If you walk away instead of answering her, approaching her again will have her tell you:

You have an option of three replies:

When approached she can potentially say:

"Iron-Breaker Mine is three times the worth of that Quicksilver Mine and its fat-head owner."
"My miners are as dumb as rocks are grey."
"Mining is hard work, but we pay a fair price for any ore you dig up."

Should Leigelf die, she may remark about it when approached:

"My husband Leigelf is dead. I... I never thought I would miss that oaf so much."

Who's in charge around here?
"That would be Jarl Skald the Elder. He's over in the White Hall, probably talking about Ulfric like he's the second coming of Talos."

If the Imperials take control of the Pale, she will instead say:

"Jarl Brina Merilis is in charge, thanks to the Empire. Best hide any Talos amulets you have."

What do you do in Dawnstar?
"I own Iron-Breaker Mine. We make twice as much coin as those horkers over in Quicksilver Mine, and don't let anyone tell you otherwise.
I pay a good wage for any iron ore you dig up, if you're looking for work."

If Waking Nightmare has not been completed and Dawnstar is still plagued by nightmares, she may tell you:

"You're wrong to come here, stranger. No rest in Dawnstar."
"No rest in Dawnstar"?
"Everyone here is having nightmares. I have miners tripping over their own feet from lack of sleep. I heard there was a Priest of Mara who was supposed to be looking into it. We'll see if anything comes of that."

If Leigelf is still alive, Beitild may tell Karl, one of her workers, about her feud with Leigelf:

Beitild: "Keep at it. We need to work twice as hard now that fat-headed Leigelf has declared war!"
Karl: "We're at war with Leigelf? Isn't he your husband?"
Beitild: "No he isn't! He's the enemy, and we are going to crush him."
Karl: "Drafted into a war, how could my life get worse?"

She can also be found urging Karl to work harder:

Beitild: "Work hard, now! The pride of Iron-Breaker Mine is on the line."
Karl: "Pride of the what? This isn't the Legion, boss. We're miners, not soldiers."
Beitild: "You'll shut your mouth and get back to work, or you won't be a miner or a soldier by the day's end. Hear me?"
Karl: "Uh, yes ma'am."