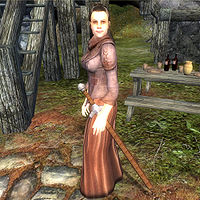 Jastira Nanus (Dementia) is a split personality of the original Jastira Nanus who lives in the settlement of Split. Her Mania counterpart also lives in Split. Like her counterpart, she is obsessed with counting, but prefers counting corpses, and wishes there were a few more around.

She wakes up every morning at 9am for her morning ritual, counting a few of the Young Baliwog corpses in her house for an hour. She then heads outside and spends the next ten hours roaming around town, occasionally speaking with the Manic and Demented citizens, and randomly returning to her house for some more corpse counting. She only takes a break from her bizarre everyday life at 11am and 5pm, when she enjoys her lunch and dinner. At 8pm, as the sun starts to fade, she returns to her house and wanders around until she finally goes to bed at 11pm. When you arrive in Split for the first time, Jastira will break off this routine and actively seek you out and complain about her double.

Jastira's attire consists of a patchwork shirt combined with tan linens and a pair of scruffy shoes. She also carries with her a leveled longsword, her house key and a level-dependent amount of gold. Just like her Mania counterpart, she knows the standard leveled Healer spells along with a set of major restoration spells.

When she seeks you out she will get right to the point: "There would be more corpses to count if someone would get rid of all the doubles around here." When asked to elaborate, she will say: "Not enough corpses around here... but there should be. Those stupid Manics. They ruin everything." If you have yet to initiate the related quest, she will then point you towards the lazy and demented Horkvir-Bear Arm for more information: "You talk to Horkvir. He can tell you what to do." When asked about doubles again, she will add: "Sure would be nice to see one more corpse around here. One that looks like me, but isn't me. Take my meaning?" She will end the conversation with an odd request: "Go kill something, so I can count its corpse." After this, whenever you get near her, she may say: "Seen any dead things laying around?"

Should you choose to help out the Mania side of Split, she will refuse to talk to you: "I can't count my own corpse! Stay back!" If you manage to fail the quest, she will hatefully say: "Counting the wrong corpses. You were a big help." If you work for the Demented and manage to slay her counterpart, she will have a new greeting ready: "It's been too long since I've seen a corpse." On Doubles, a satisfied Jastira will add: "One more corpse! Well done." If you successfully complete the quest and kill all the Mania citizens she will happily greet you: "Perfect corpses to count! Finally!" After the Main Quest, she will look at you and say: "I bet Sheogorath has killed millions of things!" After conversation, she will add: "If you kill something, let me know!"

After the quest, if you managed to complete it successfully for the Demented, talking to Jastira will make her hand over an ingredient from a corpse she just found:

At different stages in the Main Quest, the demented Jastira will share different rumors with you and other NPCs:

Three additional greetings were recorded for Jastira, but her quest and ingredient-related dialogue will always take precedence: