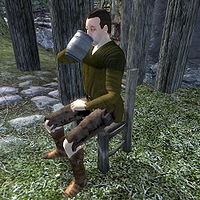 Horkvir's personality is certainly reflected in his daily routine; he wakes up late at 12pm and heads outside to sit on his chair. He will sit there for the next ten hours, watching the other residents of Split pass by. He will stand up to look for food at 2pm, and will spend two hours eating; he repeats this behavior at 8pm. At 10pm he returns to his house where he spends four hours strolling around until he heads upstairs to his room to sleep for ten hours.

His attire consists of a dark green shirt combined with patchwork pants and a pair of scruffy shoes. He carries an iron bow, an iron dagger, the key to his house, and a leveled amount of gold. In combat he relies on his dagger because he lacks any arrows for his bow. Should his dagger break he will use his fists.

Even if he is the laziest resident in Split, all demented citizens will point you towards Horkvir for more information. When you get close to him he may comment: "Talking wears me out." When you talk to him he will reveal the problem: "My double is always working. It takes all my energy just watching him work. It's got to stop." When asked to elaborate he will tell you: "It's a problem, all these doubles walking around. And it's tiresome. Didn't used to be like this." He will then tell you the tale of the mage that changed everything in Split: "Some blasted mage. Had a theory. They've always got theories. He thought there was a Manic and a Demented in each of us. So, what does he do? What else? Casts a spell. You can see how well that went. Two of each of us walking around this place. Nothing we can do about it, either. There's a law about that here. Been to the Hill of Suicides? Not a nice place. But you might be able to help." He will then explain what must be done: "Only one group can stick around. Either we Demented or those blasted Manics. It's the only way we'll find any peace. You get rid of those Manics. All of them. If you can take care of that for me, I'd make it worth your while." If you request some time to think about his offer he will respond: "Yeah, whatever. This whole conversation has worn me out. Just stay away from the other Horkvir. He might offer you the same deal. But that guy is crazy. Trust me." When approached again he will ask: "Have you made up your mind? I'm getting tired just waiting for an answer." If you accept is offer Horkvir will provide some fair warning: "Good. Just get rid of all those Manics in town, and we'll all be happier. Don't kill any Demented, though, or no reward for you." When asked about Doubles again he will lazily say: "I expect you to be taking care of the problem. I'm too tired to do it." He will also greet you with: "Have you taken care of business yet? It's exhausing [sic] just waiting for you." and bid you farewell with a bit of his wisdom: "Don't work too hard."

Should you choose to help out the Mania side of Split he will refuse to talk to you: "I heard you're working for those Manics. Leave me alone. I don't want trouble." If you manage to fail the quest he will hatefully say: "You've messed this place up. I'm tired just thinking about it." When asked about Doubles at this point he will add: "It must be exhausting messing up the way you do. Nice work." If you work for the Demented and manage to slay his workaholic counterpart he will comment: "Finally killed him, huh? Thanks. It would have been a lot of effort to find someone else to do it. You've got more to get rid of, though." If you successfully complete the quest and kill all the Mania citizens he will have your reward ready: "Got them all? Makes me tired just thinking about it. Good work, though. Here's the reward I promised." When asked about Doubles again he will add: "You cleared that up. You must be exhausted." When you talk to him after the quest he will comment: "Glad things are settled here. I can finally get some rest." or simply a lazy: "Yeah? What?" After the Main Quest he will look at you and say: "Oh... I suppose I can make the effort to talk to you." After conversation he will add: "It's been a pleasure Lord, now it's back to getting some rest and relaxation. All this talking has taken its toll on me."

His Manic counterpart shares Horkvir's hatred for his own double:"I'd get more work done if it weren't for my layabout double living in town."

At different stages in the Main Quest, the demented Horkvir will share different rumors with you and other NPCs:

"Hello there. I suppose I should make the effort to introduce myself. I'm Horkvir Bear-Arm. I hope there isn't anything I can do for you." (listen)
"Are you sure you want me? If not, I'd rather just sit down a while, or maybe take a nap." (listen)
"Oh, hello. Can't you see I'm dozing off here? I was just daydreaming about how awful life is. I'd like to get back to that as soon as possible." (listen)
"I hope there isn't something you need from me. Being needed is worse than being forgotten, isn't it? I think so. Well, go on. Go on." (listen)
"Sheogorath. What trouble brings you out this way?" (listen)