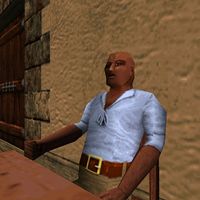 Kotaro is a Redguard middleman who runs the contractor's table near Stros M'Kai's harbor warehouses. He is affiliated with the Laborer's Guild and hires people for various jobs.

Kotaro offers you a job to retrieve an amulet from N'Gasta on the necromancer's isle and deliver it to Lord Richton. The job pays 100 gold up front and 200 gold once finished. He will answer a few questions about the job, most notably concerning local superstitions surrounding N'Gasta. He says the locals think N'Gasta is a necromancer who steals people's souls and raises armies of undead, but he doesn't believe it himself.

If you accept the job directly from N'Gasta, Kotaro will still give you the 100 gold if you haven't talked to him (see bugs). Either way, you will receive the 200 gold when the job is finished. At night, Kotaro is no longer at his table, and another bug causes him to not appear for the rest of the game.

"Sheathe that blade, Redguard. This isn't a practice yard!"

If you jump on his table:

If you have not talked to him:

"Ahoy there, sailor! Can I have a word with you?"
"Greetings, stranger! Just the man I'm looking for!"
"You there! A word, if you please!"

Accepted job from him or N'Gasta but have not escaped the Catacombs:

"Greetings, stranger!"
"What can I do for you, friend?"
"The question is, what can I do for you! The young stranger in town, fearless, footloose and fancy-free, a little light of purse, perhaps.
"I have a proposition that may appeal. But first, allow me to introduce myself: Kotaro, contractor of Stros M'Kai, at your service!"
"Cyrus. Charmed."

"And, by the way, I've already accepted the job from the necromancer himself."
"You...did? Hmmm. What did he look like, then? Hm?"
"He's a big fat slobbery wormthing."
"Splendid! Here's your 100 gold. I'll have the rest for you after you deliver the amulet to the Governor."

Accepted job but have not escaped the Catacombs:

"Cyrus!"
"Kotaro, hello."
"Cyrus, you were supposed to be delivering that amulet. We had a deal."

"Go bother someone else."

"Change you back..?! What magery is this? To a wizard with you, gremlin! Begone!"

"But that I can't understand a word!"
"What was that?"
"Some wizard lose his familiar, little one? Go on, now! Back to the guild with you!"

"I wonder if you know my sister, Iszara? I've come to Stros M'Kai to find out what's happened to her."
"I'm afraid I don't know her. I'm just a simple working man!
"You might try Dreekius up at the Draggin' Tale. Pretty much everyone in Stros M'Kai passes through his door eventually."

"What do you know about a group of ruffians calling themselves the Restless League?"
"Damn them and their bloody-minded ways! They've done more to ruin Stros M'Kai than the Forebears and Empire combined.
"If it weren't for them, this city would have been at peace months ago."

"I haven't been in Hammerfell since before the war. How do you like being a citizen of the Empire?"
"Surely beats war, my young friend. I won't lie to you, though.
"Hard to find honest labor these days -- Forebears would rather smirk than lift, and the Crowns don't have the back for it anymore."

"Sounds like the Crowns are taking their defeat pretty hard."
"I've always stayed out of politics. Bad for business.
"Crown, Forebear, I don't care, as long as their coin is true! My philosophy is, what's done is done, live and let live, the grass is always greener, you know?"

"I guess the Forebears are still savoring victory in the civil war, eh?"
"You could say that. Although you might not want to say it to their faces. They're a touchy lot these days."

"I've been up north for years, but I was pretty sure the Forebears won the war."
"Of course they did! And the Forebears like to bust up the Draggin' Tale just in case anyone doubts it.
"Some ungenerous Crowns like to point out the Imperial flags flying over the Palace, and the Imperial soldiers patrolling the streets. None of my concern, though, ha ha!"

(Disappears if you have talked to Tobias)

"I'm supposed to meet a friend at the Draggin' Tale. Can you direct me?"
"The only watering hole in town! Follow the ramps uphill to the town square.
"A bit of friendly advice -- watch your step. The Forebears are a touchy lot these days."

(Unlocked if you have not accepted the job)

"Tell me about this job you have for me."
"A simple task. Pick up an amulet from N'Gasta, and deliver it to the Governor's Palace.
"To be honest, I've been having trouble finding someone to take the job.
"But I'm sure a robust lad such as yourself pays no attention to silly local superstitions.
"Are you interested?"

"I'm considering. I have a few more questions first."
"Ask away, my good Cyrus. I have nothing to hide!"

Opens same subtopics as "About the Job".

Yes
Same as below

(Unlocked by answering yes to "Work"; disappears after quest Escape the Catacombs)

"Refresh my memory about this job you hired me for."
"A simple task. Pick up an amulet from N'Gasta, and deliver it to the Governor's Palace.

"N'Gasta?"
"A harmless old hermit. The more superstitious of my fellow citizens repeat silly rumors about him, but I put no stock in their tales.
"He lives in the old wizard's tower. Just follow the shoals on the northwest side of the island."

"Any idea what's so important about this amulet?"
"That's between N'Gasta and the Governor. I just get paid to find a deliveryman."

"How much are you offering for this job?"
"Like I said, I've been having trouble hiring for this job, so I'm upping the rate a bit. 100 up front, 200 more after completion."
"That's pretty high for a simple delivery. What's the catch?"
"The pay's proportional to the danger. N'Gasta's Tower isn't exactly on the main road, you know?
"So you may have a little trouble getting there. Nothing that you can't handle, I'm sure."

"Where can I find the Governor's Palace?"
"Straight at the top of the hill. You can't miss it. The grandest structure in Stros M'Kai, maybe in all of Hammerfell.
"Quite the tourist attraction before the late unpleasantness."

"What superstitions do the locals harbor about this N'Gasta?"
"Oh, you know, they call him a necromancer, prattle about him stealing people's souls, armies of undead, that sort of thing.
"Nothing a well-armed fellow like yourself would worry about."

(Unlocked if you have not accepted the job)

"Sure. I'll take the job."
"Splendid! Here's your 100 gold. I'll have the rest for you after you deliver the amulet to the Governor.
"Um, I'm sure you won't have any trouble, but, uh, you probably want to do this during the daylight."

(Unlocked by escaping the Catacombs; disappears once asked)

"I delivered that amulet like you wanted. I think you owe me some money."
"Indeed I do! I am ... amazed to see you! I'd heard there was some misunderstanding with the Governor. Perhaps you were, um, wanted by the Imperials?
"I never put stock in rumors, however. Here is your 200 gold, as promised."

"How is the Restless League responsible for ruining Stros M'Kai?"
"Burning or plundering half the cargoes headed for this port! Stirring up the Imperials to ever-more ruthless repression!
"The League doesn't seem to realize that the war is over, and they lost."

"You're saying the League was allied with the Crowns?"
"Depends on who you ask. I don't know.
"I'm not one of your political gentlemen, always in someone else's business -- I'm just a poor working stiff.
"A bird in the hand is better, you know what they say, ha ha!"

"Dreekius?"
"Our friendly local lizard, not that I have anything against him. Or her -- whatever.
"Can't ever tell with those Argonians. Runs the Draggin Tale, the tavern on the town square."

Another part of the first greeting exists, but the variable that enables it is never set. The description for this variable indicates that it should have been set if you complete the amulet delivery under the auspice of N'Gasta rather than Kotaro. It was probably meant to replace the other conditional dialogue:

"And, by the way, I've already accepted the job from the necromancer himself."
"So you're the Cyrus I've heard about. How did you..?"
"And I've already delivered the amulet to the Governor. You owe me some money, it seems."
"Indeed I do! I am ... amazed to see you! I'd heard there was some misunderstanding with the Governor."
"Perhaps you were, um, wanted by the Imperials? I never put stock in rumors, however. Here is your 200 gold, as promised."
"Is this all my trouble was worth?"
"Oh! I almost forgot the original retainer! Here's another 100 gold! May you have enough time to spend it!"