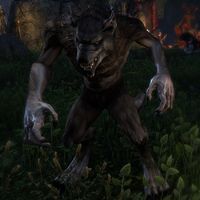 Werewolf Transformation transforms you into a Werewolf. This transformation will cause up to 3 nearby enemies to flee in terror. Your Movement Speed, Stamina Recovery, Physical and Magical Resistance are all increased, and your light attacks have an added damage over time. While in Werewolf form, you will take increased damage from Poison. After the effect wears off, you will be unable to move for a few seconds.

Note that this skill is given to you for free upon completing the quest that turns you into a Werewolf, making it the one and only Ultimate skill that does not cost a skill point (though the morph still does). Kills earned while in Werewolf form will advance your level in the Werewolf skill line. All of the Werewolf active and passive abilities are only available while in Werewolf form, and no other active skills may be used until you transform back.

With the Pack Leader morph, you will summon two wolves to fight at your side. Or you can choose Werewolf Berserker, which increases the damage over time from your attacks.

First, you'll find leveling and maintaining your Werewolf is now considerably easier. The Devour passive is now granted automatically from the very start, so you can sustain the form better at lower levels before you've unlocked all the other skills. We've also significantly reduced the experience requirements to morph all skills.
Second, you'll be able to do more core combat actions as a Werewolf, such as resurrecting your allies or using Synergies. Werewolves will have a much easier time engaging in group content now that they can help their friends more effectively. This, coupled with some other changes such as the Blood Rage passive triggering on damage dealt instead of damage taken, means they can be more viable in group PvE activities such as dungeons.
Finally, many morphs and abilities were changed to improve the cohesiveness of the Werewolf kit. Some combos and effects that weren't very effective have been removed, while others were tweaked to better support the fast and ferocious playstyle of the Werewolf. As an example, we removed the stuns from Pounce and Piercing Howl, but dramatically improved Roar by making it instant cast, fear more targets, and have more competitive morph effects.