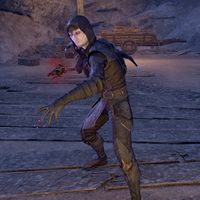 Vampire Fearmongers are vampire blood mages who can be found in Kagnthamz and Kilkreath Temple. Fearmongers can also be encountered in the wilds of Western Skyrim and The Reach.

Aspect of Terror
The enemy casts a spell that does moderate magic damage and fears the player for a short time, in which they cannot move or perform any actions. This effect passes through block, and players can break free from it. This spell can be interrupted to set the enemy off balance, or avoided using roll dodge.

Shadow Cloak
If the target is in close proximity to the Fearmonger, they will turn themselves invisible and move to a better location and set the player off balance.

Summon Bound Hemoptera
The Fearmonger summons a Bound Hemoptera, which channels a buff on the Blood Mage that causes them to do twice the damage and take less damage If the Hemoptera is interrupted, it becomes an Unbound Hemoptera. They will be rebound to their summoner after 15 seconds.

Sacrifice Hemoptera
The Fearmonger can destroy its Hemoptera to heal itself.

When encountered you can overhear them talking with a Vampire Darkblade and accompanied by a Death Hound:

Vampire Darkblade: "No one is coming to save you, fool."
Vampire Fearmonger: "Oh, this one will save him."

You can also find Darkblades and Fearmongers during encounters where the Darkblade is feasting upon an incapacitated Victim. A Fearmonger and a Vampiric Kagouti will spawn when the Darkblade enters combat.

Vampire Darkblade: "At last, a private meal."
Vampire Fearmonger: "Not sharing, are we? How unkind."