< Elder Scrolls Online: Quests: Southern Elsweyr / Side Quests
Kidnappers abducted Skordo the Knife, but their caravan fell prey to a Dragon attack. The abductors left the hard-nosed Orc behind, but dragged off two of his companions. Skordo wants to free his friends and put a stop to the kidnappers' schemes. 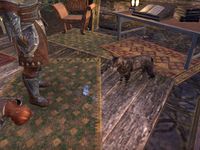 While walking up the hill near Ri'Atahrashi's Training Ground from north to south, just up from where the road fords a river, you'll hear Skordo yell out to you. He's naked and bound amidst the flaming wreck of a caravan. He claims he was kidnapped, and that their cart was destroyed by a Dragon. The kidnappers left him behind when they fled, but he made some friends during his imprisonment, whom he wants to find. Untie him and start investigating the site of the wreck so you can find a few clues as to who the kidnappers might be. There's a pile of ash with a Half Melted Token in it to the right, and a note near the cliff to the right. It talks about someone named "Lady G," and one of her contacts, Selloe, who is apparently at the harbor in Senchal. Skordo tells you to meet him at the marketplace if you find her.

Head northeast to Senchal. Selloe is exactly where the note says she is. When you arrive, she's speaking with an Argonian merchant about hoarvors. Whatever she's involved in, it involves exotic animals. Speak with Selloe after Jun-Jassa walks away. At first, she doesn't take you seriously, but then she sends you to find her drunk courier, Zurnash, who was supposed to be delivering one of those same tokens to a nobleman named Auberic Dufont. With this information, meet Skordo at the Court of Crafts. Tell him about the courier, and he admits that he saw a drunk Khajiit walking out of the inn, dropping bottles of Sugar Brandy as he walked past. Follow the trail of glowing bottles outside to the plaza, in front of the other end of the tavern. Zurnash is here, and he is easily convinced to give you his job. He even takes off his clothes and gives them to you, as Auberic Dufont is expecting a well-dressed courier to arrive with his token.

Speak with Skordo while Zurnash prepares himself to drink the day away. Skordo volunteers to deliver the token and keep Dufont occupied while you look for clues as to what this event might be. You'll meet Skordo outside when you've found what you're looking for. He puts on Zurnash's fancy robes and runs off across the street to Auberic Dufont's Residence. He starts chatting up the nobleman while you look around the house for clues. Upstairs on a table is an invitation to the event, which reveals that it's a hunt where participants track mortals. Having read it, head on outside and meet Skordo by the waterfront. Skordo sighs, as a hunt is exactly what he was afraid this shindig was going to turn out to be. Don't worry though, he has a plan. He wants you to tie him up and take him to Selloe down by the docks. She's missing an Orc, and might be glad to have one for her little hunting party to track. She might even give you an invitation to this event if you ask nicely enough after buttering her up with Skordo. Tie him up and bring him down to Selloe.

Selloe is pleased with your offering, and allows you to meet her mistress. Right on cue, Lady Ghisiliane arrives at the docks. She notices the bound Orc accompanying you, and thanks you for your "donation". She gives you an Exclusive Entertainments Token in exchange for Skordo. This will allow you to participate in her hunt. Travel to the Western Plains wayshrine and head north towards the road. You will be stopped by Hunt Master Tildulon, who will ask to see your token. He lets you through when you show it to him, warning you to keep watch for an Orc. Now you just need to find Skordo. Travel through the swamp until you find him. He leads you to an area with a short wall, where Tajahir lays dying. Tajahir says Marekki ran into the ruins to kill Lady G. He's worried that she's going to get herself killed. Skordo tells you to see if you can help Tajahir while he goes to stop Marekki. Tajahir

Take the Slimy Key and enter Ghisiliane's Den. Kill her, then meet Skordo and Marekki by the Western Plains Wayshrine. They thank you for saving them and ending Lady Ghisiliane's atrocious business, though they mourn the loss of Tajahir.

This Elder Scrolls Online-related article is a stub. You can help by expanding it.
Retrieved from "https://en.uesp.net/w/index.php?title=Online:The_Deadliest_Prey&oldid=2328828"
Last edited on 10 January 2021, at 02:57