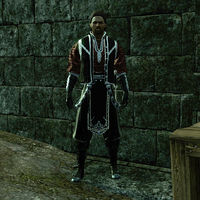 Talrahal is a Redguard healer who can sometimes be found in the Sewer Tenement, and is a potential target of the Black Sacrament. A brother of one his former patients blames him for his sibling's death, despite it being caused by the Knahaten Flu, which Talrahal could not have stopped.

Talrahal can be found in the hidden room that branches off from the sewer's large western chamber. The room's entrance's is along the large chamber's eastern wall, about center-aligned with the chamber.

There is one Achievement associated with this person: