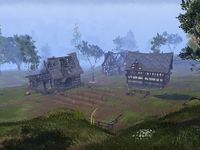 Pell's Gate is a ruined village in central Cyrodiil, east of Castle Roebeck. The village has been overrun by bandits from the nearby Homestead Ruins, who are the apparent reason for its destruction. It does not have its own map marker. A heavy sack can be found in the eastern house, as well as the barn to the north.

Eneriell and her sister Thiirril used to live here, but have fled west towards Vlastarus.