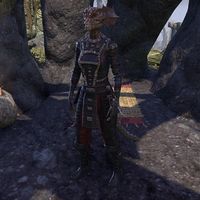 Pale-Heart is an Argonian Shadowscale, and part of the team trying to retake the settlement of Murkwater from the Aldmeri Dominion.

After freeing the captured Shadowscales, you meet her at the rendezvous:

"You must be the one Radithax spoke of. Our agents owe you their lives."
I hope they had the information you needed.
"Indeed. The Dominion is searching for an Ayleid artifact, the Relleis Lor keystone. Radithax believes it's too powerful to fall into their hands.
The citizens of Murkwater that weren't killed in the invasion are being forced to excavate for it."
What about the keystone?
"The Dominion took particular interest in a local scholar named Haj-Tulm. She was spotted, accompanied by two guards, headed to the eastern Ayleid ruins.
I believe Haj-Tulm can lead us to the keystone."
What exactly is the keystone?

"The keystone is a relic that can tap into the power of Loriasel, an Ayleid ruin here in Shadowfen.
If someone obtained all the keystones they'd have control over Loriasel, and that would grant them immense power."

Why is this one called the Relleis Lor keystone?

"The Ayleids kept the keystones separated. One was hidden in Relleis Lor, the ruins you see around Murkwater.
The Dominion must have learned this and sent a force to recover it."

[Persuade] I'm doing most of the heavy lifting here. Care to give me a little more support?

"You can't see the work we do from the shadows. However, this operation would be doomed if it weren't for you ....
Ask Nuwisha to lend you one of her agents."

After setting the river on fire:

"I could hear the fire salts exploding from here. Good work. My agents will make quick work of the Dominion's forces.
Now, to end this. Do you still have the Relleis Lor keystone?"
Yes, I have it.
"Radithax and I think you should be the one invested with the power of the Relleis Lor keystone. The only way to acquire it is by absorbing the stone.
Radithax knows the ritual."
Why me?
"Because the Shadowscales know you're someone we can count on, someone who sees things through to the end. You deserve to possess its power.
Are you ready to begin the ritual?"
Yes, start the ritual.

Pale-Heart: "Radithax, if you will."
Radithax: "Of course. May Sithis watch over you, my friend."

Radithax is visibly hurt after performing the ritual:

Pale-Heart: "Radithax, are you hurt?"
Pale-Heart: "I'll be fine. I have the marsh in my veins."

"You and the keystone are now one. Its power resides within you."
What can I do with the keystone?
"You'll know when the time comes. By now, my agents should have retaken Murkwater. They'll be celebrating in the village as we speak."

"Well done. You've made quite a name for yourself among the Shadowscales.
Soon, our services will be required elsewhere. We may need you again in the future."

If you have not started Trials of the Burnished Scales, after aiding the Shadowscales at Murkwater, your conversation with Pale-Heart will continue:

"If you're leaving soon, I'd like to ask a favor of you."
What's that?
"Take word of what we've accomplished to Azinar in Hissmir. They know the situation here at Murkwater, so they should be informed.
It's not far from here, just to the northwest."
I can do that.