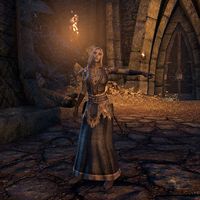 Nostrum Breva is the officious Dunmer healer leading the Maulborn contingent inside the catacombs located near the settlement of Serkamora.

Through research notes and letters found throughout the catacombs, it's revealed that Nostrum Breva is the mastermind behind analyzing and researching new strains of the Llodos plague, aiming to make the plague last long enough to infect an entire city, rather than just killing the host.

She can be found overseeing Maulborn working to move containers of the Llodos plague to Narsis. Nostrum Breva's management style consists mainly of yelling at her underlings, even threatening to throw them to the plague husks should any casks of plague dropped.

Fighting her is entirely optional, although it's quite likely she will be alerted to your presence should any of her Maulborn be attacked regardless. She is a healer and will heal any Maulborn. While this makes fighting the Maulborn trickier with her fighting alongside them, it also means she isn't a particularly difficult threat to deal with if you tackle Nostrum Breva by herself, without her underlings.

Minor Wound
A basic ranged attack that does minor magical damage.
Focused Healing
The enemy will heal any allies that are hurt, including itself. Enemies often indicate this by calling out for healing (I'm hurt!, I need healing!, Healer! etc.) This effect appears as a yellow beam connecting the healer and its target. This spell can be interrupted to set the enemy off balance.

Nostrum Breva can be heard commanding her underlings,

"The next one of you to drop a cask gets fed to the plague husks!"
"We need to get these crates to Narsis as soon as possible."
"Don't dally! We have a schedule to keep."
"Be careful with that!"
"Remember that our mission is sacred. Soon all of Morrowind will know about the Maulborn."

When she attacks you, she will yell out,

"You can't stop the Maulborn, you fool! We are the cleansing fire that burns across Morrowind."