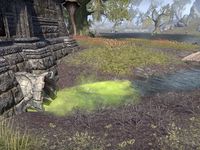 The Llodos Plague is a contagious disease that turns victims into violent husks. The time it takes to corrupt a person's ability to think depends on the strength of the sample they are exposed to. The disease spreads through physical contact with a victim, and can also become airborne, though it is only infectious over a few meters before it disperses.[1] The disease originated in Serkamora but has subsequently spread across the region of Redolent Loam to Narsis and Muth Gnaar monastery.[2] It was created by the Maulborn as part of a plot to end the worship of the Tribunal.[3]

There are typically four stages of the plague. The first stage lasts between three to seven days, and starts with a mild fever and random bodily aches and pains. Afflicted also have a terrible hunger that cannot seem to be satisfied.[4]

The second stage is marked by a high fever, overall weakness, and the appearance of open sores upon the body. Pain grips the afflicted, making most normal activities impossible to perform. During this stage of the plague, the afflicted's appetite disappears, and it is a struggle to eat and drink sufficient amounts of food and water to maintain their body weight. This stage of the plague can range from seven to fourteen days. If the afflicted doesn't throw off the plague during this period, chances of survival drop to almost zero.[4]

The third stage of the plague marks the beginning of the end for the afflicted. The open sores now cover most of the afflicted's body, which burns with such heat that the afflicted becomes delirious and subject to hallucinations. The afflicted refuses to eat or drink, and any kind of movement results in agony. This stage of the plague is relatively short, lasting from one day in extreme cases to as long as five days for those unfortunate enough to hang on.[4]

The final stage of the Llodos plague can take one of two paths. Many of the afflicted simply die an extremely painful death when the plague has run its course. The other path results in the afflicted transforming into undead creatures that are known as "plague husks". These violent creatures become intent on attacking anything they encounter.[4]

There is no known cure; however, a suppressant exists for those exposed. Brewing Kyne's Heart healing herbs, sour milk tea, and dragon scale mushrooms over a quarter flame on an alchemy lab produces the required mix.[5][6] Another known suppressant are the healing powers associated with the Tear of Saint Veloth, a relic kept by the monks of Muth Gnaar. The healing powers of the relic do not appear to be enough to cure the disease, merely keeping it in check. Additionally, one needs to remain in close proximity to the relic for it to work.