This article is about the skill. For the horse, see Meteor (horse). 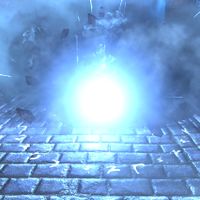 Meteor deals Fire Damage to a target and splash damage to other nearby targets. It also knocks them back and deals additional damage over time. The Ice Comet morph changes the damage to Frost Damage, and also reduces the movement speed of affected targets, while Shooting Star restores your Ultimate for each affected target.

This Elder Scrolls Online-related article is a stub. You can help by expanding it.
Retrieved from "https://en.uesp.net/w/index.php?title=Online:Meteor&oldid=2697466"