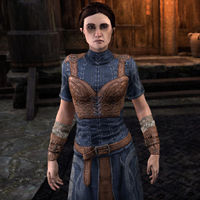 Magister Fridelja is a Nord and court wizard of Jarl Olfwenn of Karthwatch. After a harrowstorm hit the town, Fridelja was one of the few survivors and can be found in the Jarl Olfwenn's Hall.

After you and Svana have destroyed the Gray Reliquaries around the town and killed Sister Elra, the princess will suggest looking for the Jarl in her home. When you enter the hall , you will find it filled with bodies and a frightened Fridelja will yell at you as she readies a spell.

Magister Fridelja: "Stay back! Don't make me—oh, you're not one of the witches or their monsters."

When you speak with her, she will recognize Svana.

"I thought this was the end for me. I barely have the strength left to conjure a light breeze.
Wait a moment … is that Princess Svana?"
Svana and I are here to help. Tell me who you are and what happened here.
"I'm Magister Fridelja. I serve Jarl Olfwenn as her court mage. I've been fending off witches, vampires, and these crazed villagers since the chaos started.
There was a storm. Definitely magical in nature. It turned our own people against us!"
What about Jarl Olfwenn? Is she still alive?
"I … I'm not sure. I sent the jarl into the cellar when the storm began. When I still thought it was just a bad storm ….
Please. Go downstairs. Make sure the jarl is safe. Karthald will be lost without her."
I'll try to find Jarl Olfwenn.

Magister Fridelja: "The cellar. Jarl Olfwenn is in the cellar. Make sure that she's all right."

Speaking with her before going downstairs:

"The cellar door is over there. Please hurry. I haven't heard a word out of the jarl since I sent her downstairs."

When you go downstairs, you will find Jarl Olfwenn has turned into a harrowfiend and is scrambling to grasp her crown. Svana will ask you to retrieve the crown before heading upstairs. If you do go upstairs without the crown, Fridelja will also ask that you retrieve it.

"No matter what you find down in the cellar, please recover the jarl's crown."

With the crown you can give it Fridelja who will recognize it. You can then ask her if she knows how she survived the storm. 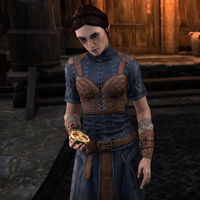 "Could this be some sort of protection against the storm?"

"That's the Karthald Crown.
Jarl Olfwenn's gone then? I failed her."
You did everything you could. It's a wonder you weren't affected by the harrowstorm.
"Harrowstorm? Is that what you call what happened here? Why I didn't turn into a monster is a mys—wait!
The hold soldiers clashed with Reachmen scouts a few days ago. They brought back these medallions the scouts were wearing."
An Icereach Coven medallion. I've seen them before. You had this on you the entire time?
"Yes. I was preparing to study the enchantments I detected upon it when the harrowstorm struck. I guess I slipped it into my pocket without really thinking about it.
Could this be some sort of protection against the storm?"
It certainly seems possible. We might be able to use that knowledge to protect the kingdom.

Svana will then have a request of Fridelja as the highest ranking official left.

Svana: "Magister Fridelja, as the highest-ranking official remaining from the court of Karthald, I need you to come to Solitude."
Magister Fridelja: "Of course, Princess Svana. I'll help you convince the high king."

"If only I recognized the threat sooner. Or realized what I had in my pocket. I could have saved my jarl."

Svana will ask you to find Lyris and meet her back in the Blue Palace. In the meantime, Svana and Magister Fridelja will make their own way back.

Fridelja will make an oath.

"I failed Karthald once. I will not fail it again.
I'll help Princess Svana get those who survived this atrocity safely to Solitude. I give you my word."

As you leave the hall you can overhear Magister Fridelja.

Magister Fridelja: "I feel fine, princess. My spells will get us to Solitude, of that I swear."

When you arrive in Svana's chamber in the palace with Lyris, Magister Fridelja will be sitting in the corner.

"I am neither jarl nor thane, but Svana asked me to come to Solitude to help petition the high king.
He may not listen to me, but I'll do what I can to aid the princess."

Upon returning to the Blue Palace after leaving, she will have left Svana's room and can found standing with Jarl Reddharn on the second floor. If you speak with her before Svana, she will give her opinion on the king after meeting him.

"Princess Svana has been waiting to speak to you. She's in her private chamber.
I've tried to talk to High King Svargrim but he has been somewhat … distant, shall we say? Grief-stricken, perhaps? His dismissive attitude is beginning to annoy me."

Once you have spoken to Svana and read a letter, she will instead reiterate her oath to aid the princess.

"It feels strange, representing a hold that may no longer exist. Still, I have seen the results of these harrowstorms up close. I'll do everything in my power to save our kingdom.
The next time Svana speaks to her father, I'll be right by her side."

When you return from Blackreach after rescuing Fennorian, she'll tell you about her progress with the medallions.

"I still need to finish studying the Icereach Coven Medallion. If I can ascertain the enchantments used to protect its wearer from the harrowstorms, that will give us something to go on."

If you return to the Blue Palace to speak with Svana to start the quest, she will now be in the throne room with Jarl Reddharn and Old Mjolen. Fridelja will comment on the situation and Svargrim's lack of action.

"The desperation, the despair. More and more of our people have disappeared or become harrowed while the survivors crowd inside the walls for shelter.
If High King Svargrim doesn't act soon, there may not be a Skyrim left to save."

After you return from investigating the Gray Host camps, you will need to get some Arkay's Sacred Oil from the Hall of the Dead. Magister Fridelja and Jarl Reddharn will be standing outside.

Jarl Reddharn: "Gods, more refugees arrive by the hour. Why does Svargrim hesitate?"
Magister Fridelja: "The high king issues orders, but all they do is lock away the afflicted. When will we strike back?"

If you talk with her, she'll talk about her experience with the priest.

"I hoped the words of the high priest would offer some comfort, but no. The poor man seems more in need of solace than the faithful of Solitude, and still the refugees pour in.
My jarl dead, our hold destroyed, and the high king does almost nothing."
Princess Svana has a plan to help the people.
"The princess … can we really trust that troubled young woman? After everything you did in Karthwatch, I suppose I must.
If you and Svana truly have a way to help, please be quick about it. I fear we're running out of time."

When you have tested the elixir and found out about the Gray Host's plans for Solitude, Fridelja will be with everyone else in the throne room, trying to convince the High King.

"If the high king plans to stay on his throne, then he needs to lead. This inaction is infuriating! If he won't do something, then he should step aside. And the sooner, the better!"

After High King Svargrim reveals his allegiance, Fridelja can only say:

"How can this be? The high king, sacrificing his own people … it's so hard to believe!"

Talking with her after hearing the Solitude Soldier's report. It is giving her flashbacks to Karthwatch.

"This is bad. It's Karthwatch all over again …."

She will have survived the harrowstorm over Solitude and can be found in the Blue Palace courtyard among the crowd.

If you talk to her before Svana, she'll be thanking the gods.

"Praise the Divines for sparing Solitude. I have enough souls to mourn today."

After the send-off, you can ask Fridelja what is next for her. She can later be found in the Blue Palace.

"We made it through, if barely. When the clouds began to gather over Castle Dour, I feared I'd have to witness ….
Thank you for stopping it. I don't know that my heart could bear another Karthwatch."
What will become of Karthwatch now?
"The rest of Karthald fared as poorly as its capital. The hold has been laid to waste, its people dead or scattered. With so few left to rebuild and resettle, I fear the Reachmen will come to claim it long before Nords set roots there again."
What will you do then?
"I have already pledged myself to Svana. I will serve as her court mage. I hope to counsel her better than I did Jarl Olfwenn. For now, I've used my status in the Mages Guild to solicit their aid in producing the harrowstorm elixir."