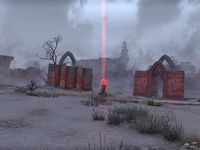 The Magical Anomalies are five ruins in eastern Craglorn. They consist of a wide open area with a red Focus Crystal in the center, which the Celestial Serpent is using to siphon the power of the Celestial Mage for his own use. Groups can attack the crystal and survive the event for a treasure chest.

Upon attacking the large red crystal in the central sconce, six or more spellfiends and an atronach will attack from the outsides of the area. Focus damage on the crystal and pull enemies in to the center to AoE them down. More adds spawn at regular intervals until the crystal is destroyed. When the crystal explodes a massive Air Atronach boss will spawn. Adds continue to spawn through the fight until the boss is defeated.

Survive the event for a treasure chest that will appear near the crystal and a spectral mage who speaks some dialogue. Also, a "Magical Aura" near the crystal can be activated to receive the Magicka Attunement buff for 1 hour, which increases your Spell Resistance by 1320 while in Craglorn.

There is one Achievement associated with these locations: