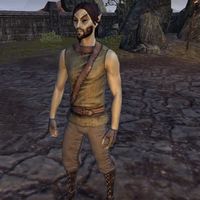 Madras Tedas is a Dunmer who can be found in his house in Narsis. He is trying to rally the villagers to find their missing families.

When you first enter Narsis, you can hear him speaking to Malni:

Madras Tedas: "When are the guards going to do something about our missing people?"
Sergeant Malni: "I assure you, we're doing everything we can. We're stretched out thin as it is, but …."
Madras Tedas: "Excuses! When your family disappears, what excuse will you use then? I'll find them myself. Just stay out of my way!"

Through with the conversation, Madras heads into his house.

When you enter Tedas House, he is already doing his speech:

Madras Tedas: "House Hlaalu wants us to believe that our friends and family left Narsis without saying a word."
Madras Tedas: "But we have proof that they were abducted. And what does Hlaalu do? Nothing! They seal Narsis and refuse to let us act."
Madras Tedas: "No more waiting! We'll save them ourselves. We'll bring the abducted villagers home!"

Speaking to him before talking to Slips-Through-Fingers:

"Can't you see we're in the middle of a very important meeting? The fate of Narsis hangs in the balance, I dare say!"

Speaking to him after the briefing from Slips-Through-Fingers:

"You must be the one Slips told us about. She said an outsider was hired to find our people.
That's a strange thing for an outsider to do, even for Hlaalu gold. What are you really up to?"
I'm trying to help. Councilor Ralden has vanished, too.
"So that's it. Hlaalu's leader disappears, and they finally decide to take action?
I don't give a damn about Councilor Ralden. I just want our people back."
What do you intend to do?
"Act! We'll get weapons, ignore the lockdown, and rescue our people. If anyone tries to stop us, we'll cut them down.
Are you going to help us or not?"
I know you want to help, but attacking the guards ….
"I don't want to fight them. They have their orders, but they're wasting time. Every second that passes is another second our people remain in danger.
Sometimes you have to resort to drastic measures to save the ones we care about."
If I help you, I may lose the support of House Hlaalu.
"I know this isn't an easy decision. Especially for someone who has no stake in this.
But I have to know if you're going to help us. We could use someone with your skills."
I'll help you.

"We need weapons. We can't fight the Maulborn with our bare hands."
Where can I get weapons?
"Steal them.
The House Hlaalu armor has everything we need to launch a full assault. If you really want to help, that's what we need."

Peasants going up against the Maulborn? That's suicide. You'll all die. Let me deal with this.

"We're going to rescue our families or die trying. I don't trust you, outsider. We'll deal with this ourselves.
Leave us. Run back to your house masters and stay out of our way."

If you choose not to help him and speak to him again:

"If you get taken by the Maulborn, don't come to us for help. I'm sure House Hlaalu will save you."

If you choose to help him an the others with his plan, you can continue to talk with Madras.

"Get me the weapons. Then we'll tell you where the Maulborn hold the missing villagers.
You look like you can handle yourself in a fight. Prove yourself, and you can come with us when we launch our rescue mission."
What do I need to do?
"Speak to Seron Denelu, the smith. He has a plan to distract the guards. This will give us enough time to get in and grab the weapons.
Do what he tells you."
I'll seek him out.

"Speak to Seron Denelu. He's a blacksmith. Tell him I sent you.
Best of luck to you, outsider."

Next you'll speak with Madras will be in the Abandoned House, tending to the House Councilor.

"What a fool I am!
I led a bunch of untrained townfolk into battle they couldn't win. They're all dead, but it's my fault."
What happened?
"We were ambushed in the ruins. During the fighting, I slipped past the others and found the key to this building.
Our missing people are here. Many are alive, but by the Three! What were they doing to the dead? it's horrifying!"
What were they doing?
"They were mixing the Llodos substance with the corpses. The plague festered in them. They were bled into our water supply!
That's why Giron didn't want us to leave! He wanted to infect us all!"
Giron is dead. Stay here with the others while I get help.
"Of course. I barely arrived in time. They were about to kill Ralden. At least I was able to save one life today.
Please, hurry. These people need healers immediately."

This Elder Scrolls Online-related article is a stub. You can help by expanding it.
Retrieved from "https://en.uesp.net/w/index.php?title=Online:Madras_Tedas&oldid=2282782"
Last edited on 9 December 2020, at 05:40