This article is about the Nord in Wayrest. For the Nord at Trolhetta, see Lodiss. 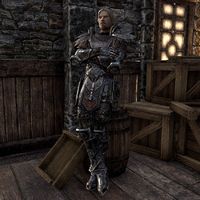 Lodiss the Rock is a Nord member of the Undaunted found at the Undaunted Enclave, outside Wayrest. You can buy him a drink for 0000006969

, which counts towards the This One's On Me achievement. He can also be found as part of the expedition to Scalecaller Peak.

Lodiss can be found in the Undaunted Enclave in Wayrest.

If you are Undaunted:

"The Lady says you are one of the Undaunted. Welcome. Newcomers buy drinks."

]
"Soon I will be thirsty again. Then I will come find you."

Why do they call you the Rock?
"It's what I use to crush faces."

Crush faces?
"Some faces talk too much. So I crush them. With a rock." 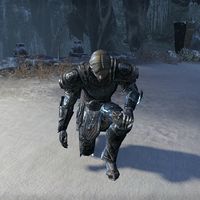 When you approach the first trash mob fight, Ila and Lodiss will acknowledge you.

Ila al-Ragath: "Fighters? What kind of idiots would come to this Eight-forsaken mountain?"
Lodiss the Rock: "What, besides us?"

Once the way is cleared, Jorvuld makes contact with the surviving Undaunted members who are stuck on the other side of a ravine.

Jorvuld Davaux: "How are you all faring? Everyone all right?"
Ila al-Ragath: "Lodiss and I are fine, but Ludovic wasn't so lucky. He fell."
Lodiss the Rock: "Always told him that name of his would do him no good."
Jorvuld Davaux: "I was afraid of that when I saw he wasn't with you. You two stay there, we'll go around to meet up."
Ila al-Ragath: "It's not like we have much of a choice. Just be prepared for battle when you get here."

Once the giant matriarch is killed, Ila and Lodiss will catch up and Jorvuld will ask them to purge the infected bodies.

Lodiss the Rock: "Looks like the newcomers get to have all the fun today."
Jorvuld Davaux: "Fascinating. I would have expected this illness to weaken the giants, but it seems just the opposite."
Ila al-Ragath: "Yet another reason to wipe the temple clean of this repugnant cult."
Jorvuld Davaux: "While I agree, we also can't allow this sickness to spread. I'll need you and Lodiss to burn the corpses, just like before."
Lodiss the Rock: "Ugh. Just call me Lodiss the Torch."
Jorvuld Davaux: "I doubt it will be any easier going from here, but we'll see you all further up."

When you re-enter the ruins, you can overhear the conversation between the others once the Undaunted members catch up.

Jorvuld Davaux: "Just a moment. I need to get this door for Lodiss and Ila."
Ila al-Ragath: "Seems like these cultists have as much of an affinity for the dead Dragon Priest as you do, Jorvuld. They keep invoking her name."'
Lodiss the Rock: "Bah. You would think these cozies would just worship a Daedric Prince, like any sensible cult."
Jorvuld Davaux: "I'm glad to see you both uninjured...and unafflicted, I hope?"
Ila al-Ragath: "None of them got close enough to give us their little blessing, I can assure you of that."

Jorvuld Davaux: "Ila, hold! Let them take care of this one. I need you and Lodiss to hold off any reinforcements."
Ila al-Ragath: "Ugh! Fine. But our deal still stands. After their leader is felled, I want my payment."
Lodiss the Rock: "By Sovngarde. Let's just focus on bashing in some heads, yah?"

After Mortieu is killed the following conversation will happen:

Jorvuld Davaux: "He wasn't the one leading them, I'm afraid. My friends, prepare yourself. For Zaan the Scalecaller...has risen again."
Lodiss the Rock: "The Dragon Priest that's buried here?"
Ila al-Ragath: "She must have it. We need to keept climbing! I will not be denied my prize."
Lodiss the Rock: "Next you'll tell me we have to fight her Dragon, too. Wait. We don't have to...fight a Dragon, do we?"
Jorvuld Davaux: "No, Scalecaller's Dragon abandoned her long ago. I fear she serves a new lord now. Perhaps one just as powerful."

dialogue when Lodiss is spoken to.

Once Zaan is defeated, Lodiss can be spoken to.

"It's not everyday I see someone take out a Dragon Priest. I would have put good gold on you losing, honestly. Glad to see you prove me wrong.
It's funny. You did most of the work, but I still need a drink."
Huh. I always got the impression you didn't like me.
"Is there a rock in your face?'
No.
"Then trust me, I don't dislike you. You're welcome to come have another drink with me in Wayrest, any time."

If you speak to him at the Wayrest Enclave after the quest, you can speak with him about the events at Scalecaller Peak.

"You may have been impressive on Scalecaller, but that doesn't suddenly make us bosom buddies. Save your heartfelt reunions for someone else."
Good to see you too, Lodiss. How are Ila and Jorvuld?
"No idea."
Really? That's all?
"Look, don't go asking questions if you aren't going to accept the answer."
Fine, but I have to know. Why do they call you the Rock?

You can then ask him the same question about rocks and faces.

Your Dauntless Deeds in Asylum Sanctorium!Edit

Lodiss the Rock will send you a letter congratulating you for achieving a weekly leaderboard spot for veteran Asylum Sanctorium.

This Elder Scrolls Online-related article is a stub. You can help by expanding it.
Retrieved from "https://en.uesp.net/w/index.php?title=Online:Lodiss_the_Rock&oldid=2473196"
Last edited on 9 September 2021, at 00:12