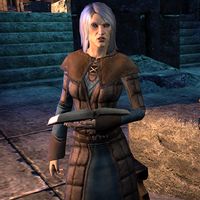 Laranalda is an Altmer member of the Mages Guild and part of the team studying the Reliquary of Stars.

You'll find Laranalda inside the first room of the ruins reading one of the books:

"If you're trying to sneak up on me, you have some competition.
These flying books can be maddeningly silent, when they want to be."
The flying books sneak up on you?
"Sometimes in pairs. They slam shut on your ear tips, then flutter off. It seems half the library has tormented us since we tripped the wards.
I've been trying to settle things down, but it's slow going without my assistants."
Where are your assistants?
"Tedryni headed to explore the Flesh Gardens. Once the wards broke, I sent Behelir to fetch him. Neither returned.
Mages Guild protocol says I should remain in place until aid arrives. I'm hoping that's you."
I'll find your assistants.

You can ask her more about the situation:

"Do be careful out there. These books are harmless enough, but they aren't the only things flitting about in the dark."
What do you mean?
"Everything was quiet when we arrived, but bones and other refuse littered the halls. With the wards broken, it wouldn't surprise me if more than books are moving about."
Why did the Mages Guild come to the Reliquary of Stars?

"The secrets in the Reliquary of Stars were long ago uncovered, save one. Incredible amounts of magicka coursed through its walls, even when the ruins remained dormant.
Until recently, this was thought to be a peculiarity of its construction."
What changed?
"It all goes back to Anumaril, one of the greatest Ayleid architects of the First Era. He built the great seal of Belarata and the Orrery at Elden Root.
Then recently, we uncovered proof that he constructed the archives in the Reliquary of Stars."
What's so interesting about that?
"Anumaril put his heart into his work—literally, if the stories have the right of it. It powered the Orrery at Elden Root until it was lost.
That's the source of power here, you see? It's what we hope to recover. Think of the potential applications!"

If you've started Fit to Rule, you can ask:

"Are you, then? The Mages Guild petitioned the court of King Camoran Aeradan for months before we were allowed to excavate, and now you hope to waltz through and collect the Heart of Anumaril for yourself?
Why would you possibly need it?"
Queen Ayrenn needs it for her ratification ceremony.
"Oh. I suppose that's a good enough reason.
We've scoured the ruins from top to bottom and haven't seen so much as a glimmer. But if we do find it, the Mages Guild would be more than happy to aid Queen Ayrenn."

Speak to her before heading off and she'll ask:

"You wouldn't know anything about proto-Ayleid literature, would you? I can't be certain if the references in these books are metaphors, or descriptions of actual events.
No matter, I'll work it out."

Once you've rescued her assistants, return to the camp and she'll say:

"Ah, good! Everyone back in one place. I was beginning to worry!"
I rescued your assistants.
"And not a moment too soon.
I managed to subdue one of the tomes. It's proven most enlightening."

"The Reliquary of Stars was created to preserve knowledge. This we already knew.
But the book speaks of a deeper level, closed off from the rest of the ruin. I suspected the Heart of Anumaril was hidden somewhere in the ruin, and now I know where."
Where is it?
"If this description is accurate, the entrance lies somewhere in the Hall of Might.
But there's something else. Would you come with me?"
All right.

Follow her to the other side of the chamber and she'll express concerns for Tedryni:

Laranalda: "Thank you. Tedryni has behaved quite erratically since his return."
Laranalda: "This should be far enough."
"When you went searching for my assistants, did you see anyone else?
Anyone intelligent, I mean. Spectres don't count."
'There was a Daedra named Ukaezai in the Flesh Gardens."
"Damn. That's what I was afraid of. The book mentions her specifically, some sort of 'caretaker.'
Her specialty was … well, there's no easy way around it. She controlled the minds of others. It seems even the Ayleids feared her."
Do you think she's controlling your assistant?
"Maybe. Tedryni hasn't been the same since he returned. He's normally so enthusiastic about his studies, but he's withdrawn into himself.
It's downright unsettling, watching him suffer like this."
What do you want to do about it?
"I'd like to run some simple tests for signs of Daedric influence.
While I do so, would you bring Behelir with you to search the Hall of Might? I suspect the Heart of Anumaril lays within its walls."
All right.
"Wonderful. If this tome is correct, there's a passageway hidden in the library. I'm sure you and Behelir will find it."

Behelir will come running from across the room:

Behelir : "I heard my name. What do you need?"
Laranalda : "Behelir, our friend needs your help in the Hall of Might."
Behelir : "The Hall of Might! So you think we've found it? Exhilarating!"

Speak to her before leaving with Behelir and she'll warn:

"Be careful. If the Heart of Anumaril is here, it may be well guarded."

It becomes apparent that Behelir is being controlled by Ukaezai. He enters the next room where Laranalda is waiting:

Defeat Ukaezai and exit the ruins for find Laranalda waiting for you:

"You! I hadn't thought you'd make it out alive. Ukaezai must have been formidable alone … with the Heart of Anumaril in her hands, I can hardly imagine.
You do have it, don't you?"
Yes, I have it right here.
"Wonderful. When all the flying books fell, I knew it had left the ruins.
I'll return it to the Elden Root Mages Guild, per our agreement with the king. We won't need to worry about Daedra finding it there."
King Camoran Aeradan needs it brought directly to the Orrery.
"Very well. So they're really going through with it, are they? I'd pay my weight in gold to see the Orrery working.
I'll personally ensure it reaches there without further trouble, don't you fear."
What will you do now?
"After I return it to the Orrery? Perhaps I can research its properties once the ceremony is complete.
If the queen allows, of course. I'm not one to stand in the way of royalty."

She runs off and disappears.

This Online-related article is a stub. You can help by expanding it.
Retrieved from "https://en.uesp.net/w/index.php?title=Online:Laranalda&oldid=2080991"
Last edited on 1 January 2020, at 20:09