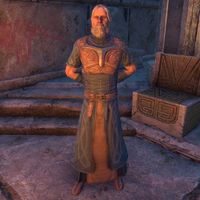 High Shaman Glynroch is a Reachman priest who can be found at the Shrine of the Hunt-Father in Markarth. He disappears after you've finished the questline.

Doing his questline will not physically update the shrine to show that it has all the Symbols.

Before you begin your search for relics, he welcomes you to the temple.

"Forgive me, wanderer. I would offer you sanctuary under the watchful eyes of Hircine, but this shrine remains sadly incomplete.
My apprentices should return shortly with the sacred relics we need to dedicate the shrine to the Hunt-Father."

After you begin your search for relics, you can ask him more about them.

"May the Hunt-Father guide your path and lead you to the most worthy prey, wanderer."
Tell me more about your apprentices and the relics you sent them to retrieve.
"Ard Caddach granted us this hall to establish a shrine to honor Hircine. I sent my apprentices to retrieve the Symbols of the Five Aspects from the clans that guarded them. They will be safer inside these walls."
What are the Symbols of the Five Aspects?
"Hircine the Hunt-Father has many names, but only five aspects—Alrabeg, Storihbeg, Gulibeg, Hrokkibeg, and Uricanbeg. A proper shrine must honor them all.
I sent my apprentices to the clans with some of the most revered versions of the symbols."
And none of them have returned yet?
"Just Edola, with the Symbol of Alrabeg. But this shrine will not be complete without all five symbols. Perhaps Hircine tests us, making us hunt for what we need most.
The Reach is dangerous, though. Especially now. I fear for my apprentices."
You think your other apprentices are all dead?
"I certainly hope not, but they've been gone so long ….
If you run into my other apprentices, offer whatever aid you can. And if the worst has happened, I would be grateful if you could retrieve the symbols they carry and return them to me."

When you approach him to return the first symbol, he says:

"You approach with purpose, wanderer. Hircine has sent you to me for a reason, it would seem.
My apprentices should return shortly. I sent them to retrieve the sacred relics needed to dedicate this shrine. Until then, what can I do for you?"

If you finished one of his other quests, he will instead say:

"Ah, the wanderer. I remember you. You returned one of the sacred relics of Hircine to me.
Tell me, what brings you back to our as yet undedicated shrine?"

If you finished two of the other quests, he will instead say:

"For a third time, the wandering hunter graces this hall. Welcome.
What tidings do you bring this time?"

A Nord raider called Ansdurran stole this from one of your apprentices.
"The Symbol of Gulibeg! I sent my apprentice, Layren, to retrieve it. She would never have let it fall into the hands of a raider. Not while she still drew breath.
We will mourn later. For now, we rejoice at the recovery of another sacred relic."
What is it? It looks like just a bone to me.
"Oh, it is more than that. The tales tell us that Gulibeg the Quick Fox fashioned a shard of bone from Lorkh's ribs into a wand that could confound any mortal.
Of course, this is only a symbol, but it deserves a place of honor in this shrine."
Here, place the relic in this Shrine.
"In some tales, Gulibeg's swift bite weakens his adversaries. Then he tricks them into falling from a cliff or drowning in a river. Perhaps that's what happened to the raider.
No matter. We have the relic, thanks to you. Take this for your efforts."

I recovered this relic near Apprentice Gwerina's corpse.
"Gwerina's dead? I feared it was so when she did not answer my summons, but I prayed I was wrong.
Hircine will guide her to the Hunting Grounds and she will find her place. You say you recovered a relic? The Symbol of Hrokkibeg, I hope?"
I found this simple totem of claws and fangs.
"Aye. That is the relic, simple though it may appear. Hrokkibeg is but one aspect of Hircine, known also as the Mighty Bear.
Will you give me the relic so I may add it to this shrine? That would be a fitting tribute to my lost apprentice."
Here, place the relic in this shrine.
"And I thank you for that, wanderer. Apprentice Gwerina would be pleased to know it made it here. The Symbol of Hrokkibeg will forever be a part of this shrine, helping to create a proper sanctuary.
Here. I can't let you leave without a proper reward."

If you exit conversation and speak to him before turning in the quest, he says:

"Eventually this place will serve as a proper shrine to the Hunt-Father, our Lord Hircine. Once all the relics are set in place.
Only now I worry for the safety of my other apprentices. I sent them to retrieve relics for this shrine."
At least you have the Symbol of Hrokkibeg for the shrine.

Someone named Kitza-Enoo stole this relic from Apprentice Egvarn. I recovered it and brought it here.
"Kitza-Enoo, you say? The Argonian worked for a vile man from Gideon who deals in Daedric relics.
The totem has meaning to us as a symbol of Storihbeg, the King of Wolves. One aspect of the great Hircine, our Hunt-Father. But it has no inherent power."
So, both Kitza-Enoo and Apprentice Egvarn died for nothing?
"Any death has significance, great and small. One died for disrespecting the Lord of the Hunt, the other defending him. That is the way of things.
Thank you for bringing this news to me, wanderer. What will you do with the sacred relic now?"
Here. Take it. Place the relic in this shrine.
"Some of our oldest songs speak of Storihbeg, the King of Wolves. He first taught our ancestors to change shape and become even mightier hunters. Our shrine must pay homage to this aspect of Hircine.
Take this, wanderer, with my thanks."

After completing the other quests, High Shaman Glynroch will open up to you:

"With your help, the hubris that clouded my sight has lifted. It is not by coincidence that these sacred relics were hindered in their journey to this humble shrine. The Hunt-Father tests us.
He tests me and my apprentices. And he tests you."
Hircine tests us? How?
"The greatest hunts involve obstacles to overcome and hazards to circumvent. Hircine has thrown deadly hurdles in our path, hurdles my apprentices have thus far been unable to overcome.
Still, all but one of our relics arrived here, thanks to you."
And what about that final sacred relic?
"The final relic required to complete this shrine resides at Lost Valley Redoubt. I sent Apprentice Orla there to find it, but after all this, I fear for her safety.
Go, hunter. Help Orla retrieve the Symbol of Uricanbeg. Prove your worth to Hircine."
I'll look for Apprentice Orla at Lost Valley Redoubt.
"I hope Apprentice Orla still lives. Hircine tests our limits, but he is never needlessly cruel.
Good hunting, wanderer. Find Orla and the Symbol of Uricanbeg at Lost Valley Redoubt, and then this shrine will be complete. Let us prove we are worthy."

You can ask questions before leaving:

How will I recognize Apprentice Orla when I see her?
"A good question. A hunter must know its quarry to track it down.
Apprentice Orla is a fierce warrior who never strays far from her loyal companion, Keeva the white wolf. If all else fails, look for the white wolf—if she doesn't find you first."
How do I get to Lost Valley Redoubt?
"Take the road out of Markarth until you reach the Karth River. Follow it south until the river meets the mountains. That's the entrance to Lost Valley Redoubt.
I sent Apprentice Orla there to find the relic. I pray her cunning has not abandoned her."

High Shaman Glynroch: "Hunt-Father, I beseech you, guide the wanderer swiftly back to us."
Apprentice Orla: "Master, look! Your prayer has been answered!"

High Shaman Glyroch will then speak to you

"Ah, the hunter returns once more. Hircine certainly favors you, my friend!
What of the Symbol of Uricanbeg? Were you able to retrieve it?"
I recovered the Symbol of Uricanbeg. Here it is.
"Excellent! With all five aspects of our Hunt-Father represented, Hircine will recognize this shrine as sacred and true.
Consider this place your sanctuary, my friend. You built it as surely as did I and my apprentices. Take this with our thanks."

After completing the quest, you will hear the two chanting:

Afterwards, you can talk to High Shaman Glynroch:

"When a wandering hunter arrives bearing an unexpected bounty, that is a good omen. That's how bonds were forged in the days of our ancestors. We have made such a bond, my friend.
Rest well, hunter. You shall find only friends here."