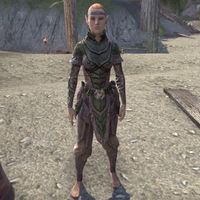 Finoriell is the current Green Lady, the embodiment of the feral nature of the Bosmer and can be met when you visit Khenarthi's Roost. As the Green Lady, she is married to the current Silvenar, Edhelorn.

Her niece and successor to the title of Green Lady, Gwaering, lives in the Deepwoods.

You meet her for the first time in the Mistral Chancery, where she expresses her disdain for Khenarthi's Roost.

"No wine. Stringy meat. My beloved Silvenar, cooling these squabbling children instead of warming our bed.
If there's a more tiresome place in all of Tamriel, I haven't found it."

After stealing the Harrani's treaty back from the Maormer Embassy, Razum-dar will direct you to talk to with Silvenar in Ladrelas' Home. The Green Lady will be lounging outside and she will not be happy to see you.

"The Silvenar's inside resting. You have five minutes."

When you enter the house and find the Silvenar dead, the Green Lady soon follows you inside after you inspect his body.

She will immediately interrogate you upon seeing her beloved dead.

"You found him like this? What did you see? Answer me!"
He was dead when I arrived.
"Then you know nothing! A thousand curses on this wretched island. They've taken my beloved!"
Who would want him dead?
"None who'll survive the day. I am the unerring bolt. Once loosed, I cannot stop 'til I pierce my quarry's eye.
Harrani knows her own city. If she won't tell you who did this, I'll shorten her tail until she does. Now go. Go!"

Following your investigation with Harrani and Razum-dar's help, you can take a sample of the poison found on the Silvenar's body to the Green Lady.

"The killer will share the pain my beloved's death has wrought. Hand down the throat, a kiss for my wrist; hand on the lungs, a kiss for my arms. Grasp, tear, yank … and one last kiss for the killer's own heart.
Now. What have you found?"
This is the poison that killed him.
"No poison in all of Tamriel could harm my beloved!
But … this scent was on his body. Why is it out here, as well? I can see it, leading away into the heart of this wretched city."
I didn't notice a scent.
"You're blind to it. Easily remedied.
Follow, if you can."

After she has cast her spell, the scent trail will be visible and you can follow her to the Abandoned House on the outskirts of the city. Once inside, you will see that the Green Lady is being held back and slowly killed by the ritual the Maormer assassin is performing.

If you talk to her, she will grit out:

The Green Lady: "Stop her so I can kill her!"

Once you destroy the ritual focus, the backlash will injure the assassin. The Green Lady will impatiently wait for you to question the Maormer.

"Get what you need. I'll get what I need in a moment."

After you have questioned the assassin and found out Ulondil is behind it, the Green Lady will do what she came to do.

Green Lady: "I've heard enough."
Assassin: "His orders! Had to follow his orders!"
Green Lady: "There, there. You did what you had to."
<Blue motes of light appear from her hand, which kill the assassin.>
Green Lady: "As did I."

Her next target is Ulondil, who will promptly flee inside the Embassy once you tell him the Green Lady still lives.

Ulondil: "The tempest is coming. You cannot stop it!"
Pelidil: "Sea-rat coward! I'll have your head for this!"
<The Green Lady runs past, into the Embassy>
Green Lady: "I have his scent. And soon, his heart."
Harrani: "Stop, all of you! This madness ends now!"

After you have spoken with Harrani, you will find that the Green Lady has cornered Ulondil on the second floor near his quarters. When you intervene she will not be in the mood for talking.

"Move. Unless you don't mind the spatter."
What are you going to do to him?
"I'll keep him alive for a time. He won't starve. His limbs have so much flesh to sustain him.
Go tell Harrani the Maormer is dead. Leave me to my work."

I'll leave it to you, then. [Ulondil dies]

"Go. This is a private matter."

No. This isn't justice, it's revenge.

"Exactly. And I'll have the blood that's due!
What does this creature's life matter to you, anyway?"

It doesn't. Kill him, if you must. [Ulondil dies]

"Go. This is a private matter."

Is this what the Silvenar would want? [Ulondil lives]

"You dare speak for my Silvenar? I'll beat you with your own flayed skin! I'll smash your teeth to powder and choke you with the dust! You're ….
You're right. Curse your bones, you're right. Take him away, before I lose myself."

If you convince her to spare him she will insult you if you try to speak with her again.

Should you let her kill Ulondil, you'll witness her torturing him:

If you talk to her again after turning in the quest by Harrani, she'll be thinking about a different way to ease her pain:

"Rum. Nothing but rum.
Who do I have to gut for a flagon of wine around here?"

After you have stopped the storm ritual on Viper Island, she is in the crowd waiting for you at Cat's Eye Quay.

"I ran out of Maormer to kill. If you find any more, let me know."
What will you do now?
"I suppose I'll mourn the Silvenar. I must find oils for his body, and tools for the rites. I can almost feel his hand on mine, and hear him whisper "all things find their way."
But they won't. He's gone forever. And soon, I'm to follow."
What do you mean?
"The Silvenar sustains the Green Lady. Thus has it always been, with every pair. I am not long for this world.
I believe I'll find the Maormer's home island. Before my beloved pulls me back to the Green, I'll drown them in a tide of Mara's tears." 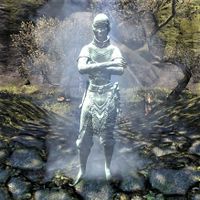 Depending on your choice in The Perils of Diplomacy, her opening dialogue will differ. If you let her kill Ulondil:

"What luck! You helped avenge my beloved Silvenar in Khenarthi's Roost.
Tell me, would you lend your striking arm to my cause once more?"

If you convinced her to spare Ulondil:

"What luck. You denied me my vengeance in Khenarthi's Roost. Had my beloved Silvenar still lived, he would have approved of your mercy.
It's your wisdom I need now. Tell me, would you aid my cause?"
What's wrong?
"My time as the Green Lady has passed. When I died upon the shores of Pyandonea, I was drawn to rest in this sacred grove—Treehenge. All of my kindred rest here, since they first set foot upon Valenwood.
Something blocks my entrance. Something vile."
Vile? What is it?
"The hengekeeper would know better than I. She is nearby, in the roots below.
Seek her out. Banish whatever darkness shadows this grove."
I'll look for her.

You can then ask her about her current situation:

"Thank you.
Oh, and when you meet whoever's responsible for this … twist the knife a little? Just for me."
What happened to you, after you left Khenarthi's Roost?
"With the swiftness of the Green, I swam to the shores of Pyandonea, home of the Sea Elves.
There, I visited my wrath upon them. I tore at flesh and bone. I cut until my arms went limp. I rent until my legs fell out beneath me."
Did they kill you?
"Ha. I gave them no such pleasure.
Their greatest warrior found me spent atop their highest sea-tower. He grabbed my hair, hoping to take my head as a prize. So I grabbed him and leapt, into the waves far below. The look on his face …."
She'll then fade away.

Once you're inside the treehenge, she'll notice all the matrons are there:

"The matrons are awake! It was much easier to enter, but I still sense … danger."

After speaking to one of the matrons, some force begins to pull at Finoriell:

Finoriell : "Something's not right. They're … pulling me away!"
She'll then vanish 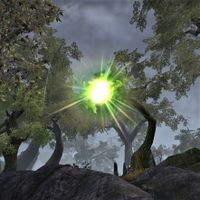 Hengekeeper Lara will teach you a ritual that will allow you to speak to Finoriell's Soul, at which point she'll tell you:

"What's going on? I feel so strange …."
The cultists nearly took you.
"Yes! I heard them whispering, felt their blackened magic!
They seek to turn me into an abomination! All of us!"
How?
"We were all once the Green Lady. The bond between us is strong, but tenuous so long as I'm not yet rooted.
If they corrupted me, it could spread through us all. I need to take root in the seed before it's too late!"
Don't worry. I'll find the seed.

Finoriell : "I'll take root in Hengekeeper Lara for as long as I can."

The Dark Night of the SoulEdit

After Hengekeeper Lara sacrifices herself to save Finoriell, you'll be able to speak with her once more.

"I hear them. The matrons, the leaves, the drops of rain. The whole forest, all around us.
And over it all, I can hear the Green Lady."
What happened to Hengekeeper Lara?
"She gave her own lifeforce to save me. I couldn't take it all, not after all she's done for us.
For now, she sleeps. We'll tend to her until she recovers from this ordeal."
Are you now part of Treehenge?
"I … I think so. I can feel again. My roots go deep into the earth. It … stings a bit.
The matrons want to thank you, but I fear their pride prevents them. So I will. Thank you."
You're welcome.
"Because of you, I've finally joined my sisters. I feel like we're old friends already.
Perhaps the four of us can heal the spriggans and drive the Worm Cult away for good. It'd be like being the Green Lady once again!"

"I'm getting stronger every minute. I wonder what my sprout will look like?"

This Elder Scrolls Online-related article is a stub. You can help by expanding it.
Retrieved from "https://en.uesp.net/w/index.php?title=Online:Finoriell&oldid=2160597"
Last edited on 3 June 2020, at 23:25