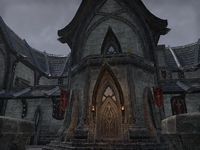 This Fighters Guild is the Haven branch of the Fighters Guild. It is a spacious two-story building. The ground floor is used mostly as a resting area with several bunk beds in the rooms at both ends of the hall. The top floor has an access to balconies, one of which is equipped as an archery range and another is set up as a training area with weapon stands and dummies. All the fireplaces throughout the building can be used for cooking. Three skill books can be read here: Advances in Lockpicking on Nightblade class skills, Call to the Faithful on Light Armor and Quotes from the Greats on Dual Wield. 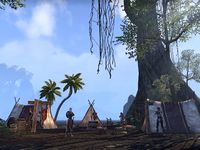 Fighters Guild's camp during the invasion of Haven 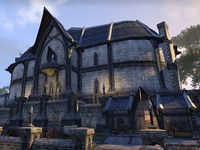 The south side of the Haven Fighters Guild and the fort

When you arrive to Haven for the first time, the city is overrun by pirates in coalition with necromancers and the building is called Abandoned Fighters Guild. It will become accessible during the Unsafe Haven quest. Guild members abandoned the guildhall and moved away to a small camp near the Fisherman's Isle. They move back in again when the city is liberated (see Bugs section).

This Elder Scrolls Online-related article is a stub. You can help by expanding it.
Retrieved from "https://en.uesp.net/w/index.php?title=Online:Fighters_Guild_(Haven)&oldid=1879152"
Last edited on 19 November 2018, at 06:15