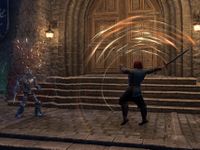 Uppercut is a simple skill that deals Physical Damage. The Dizzying Swing morph adds stun, if executed twice, and it is a good way to interrupt enemies who are charging a powerful attack. The Wrecking Blow grants you Empower, which increases the damage of your next attack, making it a good opener for a larger follow-up attack.

This Elder Scrolls Online-related article is a stub. You can help by expanding it.
Retrieved from "https://en.uesp.net/w/index.php?title=Online:Uppercut&oldid=2697519"