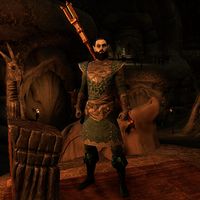 Chodala is the brother of Seryn and Ashkhan of the Urshilaku Ashlanders. He believes he is the Nerevarine and has allied with the Red Exiles in an attempt to exert his influence over all the Ashlander tribes.

Enter the Wise Woman Dovrosi's Hut and Chodala will be there instead:

Seryn: "The Wise Woman … I was hoping she'd be here."
Chodala: "You're too late, dear sister. Despite your protestations, the Wise Woman has gone to the Cave of the Incarnate to confirm my claim."
Seryn: "Brother, do you really want to pursue this dangerous course?"
Chodala: "There was a time when you gave me your unconditional support, Seryn. I miss those days."

When you exit the hut, you'll find Chodala speaking to the gulakhan:

Chodala: "She won't refuse my claim. Just in case, make sure the Red Exiles are ready."
Gulakhan Yus-Zashten: "Your word is law, Nerevarine."

She'll run off and fade into the distance.

"You helped my sister. Thank you for that. But you don't need to worry about the Red Exiles any more. They're under my control now.
As for everything else, that's Ashlander business. There's no place for an outlander here."
Are you plotting the downfall of Lord Vivec?
"Plotting? No, I'm confident that the false god will fall. Azura has proclaimed this and I know it to be true.
The Tribunal betrayed our hero and turned away from our religion. And they call us heretics. Bah!"
I understand you claim to be the Nerevarine.

"How overly simplistic the world must be to your eyes, Outlander.
I am Nerevar reborn! I will lead my people to power and glory. The Wise Woman knows this. She will proclaim it when she returns. And no Tribunal lapdogs can change that."

Seryn doesn't seem to agree with you.

"My sister is too naive and idealistic for her own good. Look at the power I wield! Feel the conviction in my words!
While the House Elves squabble and fight to carve up our land, the Nerevarine will step forth to end their tyranny once and for all!"

Inside the Skar, the meeting will commence:

At this point Chodala will give his reasons for why he is the Neravarine. You will need to direct Seryn wich scroll to use to defeat each of his three arguments.

If you get a scroll wrong, instead of calling forth an incarnate, Seryn will say:

Chodala: "Must we continue to tolerate this travesty?"

And Seryn will warn:

"Be careful. We need to get these right."

Chodala: "Even the Outlander can see that I'm the most powerful Ashkhan. My strength alone proves I am the Nerevarine!"'
"Chodala puts forth his great strength as proof of his claim.
Give me the scroll that discounts such a trait for the Nerevarine."

Seryn: "Incarnate, appear!"
Incarnate Ranso: "As a warrior and as an Ashkhan, I was the most powerful of my age. But for all my strength, I failed my people. Don't follow my example!"

Chodala: "The faithless Houses dare to threaten our land. But we shall meet them in battle and I will lead us to victory!"
"This is more nerve-racking than I anticipated! Which scroll do you recommend to counter this argument?"

Perhaps Incarnate Aduri's scroll is the best to counter this argument.
"That makes sense. I'll try that."
Seryn: "Incarnate, appear!"
Incarnate Aduri: "I thought the path to the Nerevarine was a path of blood and battle, but my love of war was my undoing. War is not the way."

Chodala: "These Failed Incarnates prove nothing! I need no counsel but my own, as befits my status as the Nerevarine!"
"I think it's working. One more strong assertion and that should do it!"

Incarnate Danaat's scroll should disprove that assumption.
"Of course. Let's see what happens."
Seryn: "Incarnate, appear!"
Incarnate Danaat: "I refused to accept the counsel of the Wise Women and the Ashkhans. I thought I knew best, but I knew nothing. That is not the way of the Nerevarine."

With the last of the testimonies, Dovrosi will give her verdict:

Everyone will flee the chamber leaving you alone to fight the exiles. 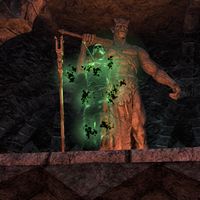 Inside Kaushtarari you'll find a number of Red Exiles that have been attacked by the Skaafin that inhabit the place. One will tell you that Chodala has gone mad. Enter the next room and you'll find Chodala on the dais of Malacath's shrine:

Chodala: "You dare refuse me, Malacath? I am the Nerevarine!"
Seryn: "Chodala, brother, stop this madness!"
Chodala: "You bring this outlander to kill me, sister?"
Chodala: "You can't harm me! I have a powerful patron on my side!"

Chodala casts a shield on himself:

Seryn: "The staff protects him. You can't hurt him until we use the tonal inverter."
Seryn: "I need a moment to get this working …."
Chodala: "What is that? No matter. You are no longer worth my time."

Chodala summons a number of Skaafin to try and interrupt Seryn with the inverter:

Seryn: "Skaafin! They serve the Prince of Bargains. Keep them busy while I finish this."

Defeat the Skaafin and Seryn will have the inverter ready:

Seryn: "The tonal inverter is ready. Stand in the field and focus the wave."
Chodala: "My protective shield—what have you done? I'll destroy all of you for this!"