This article is about the creature. For the skill, see Betty Netch (skill). 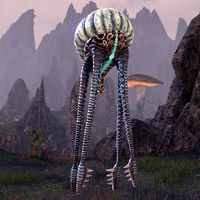 Betty Netches are flying tentacled creatures. They are predominantly found in Morrowind, but some have apparently been transported to Coldharbour due to the ongoing Planemeld.

Betty netches are considered elite creatures (despite not showing any pips), and are thus immune to all forms of crowd control effects.

Slap
The netch swings a tentacle at the player. This is a basic melee attack that does minor physical damage.
Thrust
The netch lashes out with all four of its tentacles, doing moderate physical damage as well as staggering the player. Blocking will reduce the damage taken and prevent the stagger.

This Elder Scrolls Online-related article is a stub. You can help by expanding it.
Retrieved from "https://en.uesp.net/w/index.php?title=Online:Betty_Netch&oldid=2101888"
Last edited on 17 February 2020, at 20:29