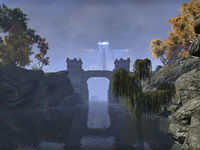 Alessia Bridge is a bridge in southern Cyrodiil, northeast of Castle Alessia, acting as a milegate between Dominion and Pact territories. The bridge is one of four crossing points on the Upper Niben, and one of three which can be destroyed. It forms a natural choke-point between the territories, which may result in occasional skirmishes between factions. It is a prime location for setting up ambushes against players traveling between Castle Alessia and Sejanus Outpost, and can be destroyed by Siege Weapons to prevent passage. The gateways at either end of the bridge are open, and access to the top of the gatehouses is possible from the bridge side of the gates if they have not been destroyed. The bridge and gatehouses can be repaired with Bridge and Milegate Repair Kits, available from Siege Merchants.

This Elder Scrolls Online-related article is a stub. You can help by expanding it.
Retrieved from "https://en.uesp.net/w/index.php?title=Online:Alessia_Bridge&oldid=1904727"
Last edited on 19 January 2019, at 23:03