< Elder Scrolls Online: Quests: The Reach / Story Quests
The Dark Heart has awakened and grows more powerful with every beat. While Verandis attempts to deal with Rada al-Saran, I need to go to Markarth and stop Lady Belain from sacrificing the entire city to the Void.

You can either pick this quest up from Count Verandis Ravenwatch at the Arkthzand Orrery immediately after completing the previous quest, or Gwendis at the North Markarth Wayshrine.

Gwendis will tell you about what's happening in the city.

"The war has started! The Gray Host attacked once and a larger force is marching toward the city!
Verandis sent me to tell Ard Caddach to fall back. To save as many of his people as he can. But the ard won't listen to me. He wants to fight back!"
I can talk to Ard Caddach. He might listen to me.
"Great! On your way to Understone Keep, look for Bradan. Arana brought the witch-rebels here to help and Bradan is leading the main contingent of warriors.
He needs to know that the whole purpose of all this is to kill as many Reachfolk as possible."
Right. Rada al-Saran and Lady Belain need as many deaths as possible to awaken the Dark Heart.
"Verandis says the Dark Heart's already awake, but it needs more souls to reach full power.
Oh, he also said that Lady Belain is somewhere in Markarth. She came to lead the Gray Host army. If we can remove her from the battlefield, all the better."
I'll inform Bradan and then go talk to Ard Caddach.

You can speak with Gwendis further after starting the quest.

Arana brought her rebels to Markarth to help the ard fight back against the Gray Host. However, a fight is exactly what the Gray Host wants; Lady Belain needs more Reachmen to die so their souls can power the Dark Heart. Verandis stayed behind at the orrery to pursue Rada al-Saran.

Your first task is to enter Markarth and talk to Bradan, who is right in front of the bridge leading to The Hunter's Repose. You'll notice that there are several Witch-Rebel Hunters in the city.

"The Gray Host came out of nowhere. Hit the city like a giant's hammer. Vampires and werewolves, rending and killing anyone they could catch.
The ard's folk thought they were safe in Markarth. Only fools put their trust in walls."
Bradan, you need to know. Every Reachfolk that dies today feeds the Dark Heart.
"Just like what Nathari did to my clan? The bastards!
Arana brought us here to help, but it may be too late. They aren't only marching toward the gates—they're coming at us from beneath the city!"
What do you mean, beneath the city?
"Lady Belain unsealed the doors to Nchuand-Zel and let the Gray Host into the city. We arrived just in time to fend off the first wave. Can't make any promises about the next.
Go to Understone Keep. Tell Ard Caddach and Arana what you told me."
I'll go to Understone Keep.

You can ask Bradan a question before moving on. 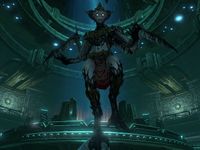 This Elder Scrolls Online-related article is a stub. You can help by expanding it.
Retrieved from "https://en.uesp.net/w/index.php?title=Online:A_Feast_of_Souls&oldid=2386836"
Last edited on 10 April 2021, at 19:09