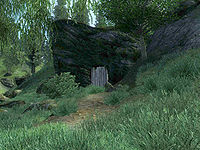 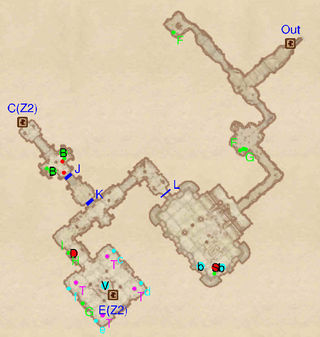 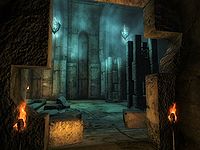 The entrance to the ruins

The first portion of this zone is a cave, and there is plenty of evidence of mining lying around, including pick-axes and crates. Head right after entering and loot the crate at F: it may contain Welkynd or Varla stones. Track back and head left, looting the three crates at F and G. You will then emerge in an Ayleid ruin; in the room you will find Skaleel (S), two bedrolls (b), a chest and copies of Magic from the Sky and The Wild Elves. Gate L requires a key, which you receive from Skaleel during the related quest.

Round the corridor you will find Denel, a crate (H) and a useful chest with plenty of scrolls at I. In the next room is the mysterious pillar (V), protected by four Dark Welkynd Stone traps (T). Along the walls are four Ayleid inscriptions (c, d, e and f) with useful information and another crate (G). Cast Fire Damage, Frost Damage, Damage Magicka and Fortify Magicka spells at the pillar to reveal the door at E.

When returning to the zone through door C, you will immediately face two enemies so be prepared. Set among two Ayleid swordman statues are four minor loot chests. As you approach, the walls at J and K will collapse, allowing you access to the rest of the zone. 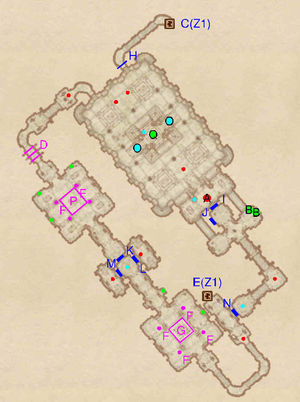 Be prepared when emerging from door E, as you will immediately face an undead enemy. The next room contains a chest, three dead skeletons, a pit spike trap (G) and four Dark Welkynd stone traps (F). Press on and loot the chest in the next corridor before pressing the nearby push block (cyan dot on map). This opens the stone walls at K, L and M, releasing two enemies. In the next room are three minor loot chests protected by a ceiling spike trap (P) and more Dark Welkynd stone traps (F).

Negotiate your way past the swinging blade traps at D and another enemy and you will find yourself in a large room with a raised platform at the center. The press block (cyan dot on map) will raise the stone steps at O and cause three enemies to appear. Fight them off and head up the stairs to the southeast. The boss-level undead (A) protects the press block opening the casing at Q, which contains the Ancient Elven Helm. The hidden door at I will also open, so head through and loot the two boss chests at B. Rather than pressing on, head back to the northwestern corner, unlock gate H and return to the previous zone through door C.

Following the related quest, you will find two enemies in the large room and won't be able to open the hidden door at I.