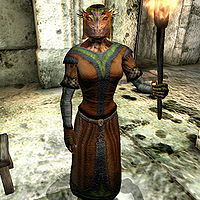 Skaleel, an Argonian mage, is a member of the Mages Guild who is currently running a research project at Vahtacen. She will be your contact from Irlav Jarol and will send you to Denel once you arrive. She is not accessible without the key given to you by Irlav Jarol in the related quest.

She lives a very simple life: between 11pm and 6am she sleeps on a bedroll in the first large chamber of Vahtacen and will then spend the rest of the day wandering around it. She and Denel have also set up a table where copies of The Wild Elves and Jarol's book on the Ayleids, Magic from the Sky can be found.

She wears middle-class attire consisting of a russet felt outfit and a pair of matching shoes. She also carries a leveled amount of gold and a torch. She doesn't wield any weapons, relying instead on a set of leveled mage spells.

Once you have received the Vahtacen's Secret quest from Raminus Polus, Irlav will greet you in relation to it and inform you of Skaleel's problem: "Here about Vahtacen, are you? It's a damn shame. I haven't been giving the project the attention it deserves. The last report I received from Skaleel indicated there was some sort of problem. A blocked passage, or something, that they couldn't get past. I'd investigate it further, but I'm needed here with the Council. Raminus says you've got a good head on your shoulders. Look into it for me, will you? You can find Skaleel at the site. Access is restricted, so you'll need this key." When Irlav is asked about Skaleel he will point you to her for questions: "She's the mage heading up on-site research. She can tell you more about whatever it is that's impeding their progress." He will describe Vahtacen: "It's an Ayleid ruin, southwest of Cheydinhal. We suspect there are some interesting things inside, so a research project was established. Skaleel is there now, working on investigating the ruins." Speaking to Irlav again will yield this response: "Get yourself to Vahtacen, and see if you can help Skaleel with whatever is holding up her progress."

When approaching Skaleel she will warn you: "This is a restricted area, I'm afraid. Guild mages only." When you speak to her for the first time she will say: "What is your business here? Don't tell me Jarol sent you..." If you say no she will ask you to leave: "Then I'll have to ask you to leave the way you came in. The guild is conducting official research here, and I can't have anyone interfering." If you instead say yes she will tell you that she is far from happy with the whole situation in Vahtacen and that she feels ignored by Irlav Jarol, the very person who sent her down into the ruin to explore: "Irlav sent you, did he? Figures. He can't be bothered to come check on his own project, so he sends someone who knows nothing about it. And this is supposed to help? No offense to you, friend. It's not your fault. And perhaps you can help. If you can figure out how to use the pillar, I'd be thrilled. You're welcome to try your hand at it." When asked about Vahtacen she will express her frustration: "This place has been nothing but trouble, as far as I'm concerned. Since we disposed of the creatures that had taken up residence here, it's been nothing but a fight to figure out how the place works. The pillar has had us stumped for more than a week now, not to mention the injuries it's caused." She will proceed to talk about the mysterious pillar: "That's what we're calling it, only because we don't know what it really is. Or was. It's magical - we know that much. Enchanted somehow. We think it's a lock of some sort, but haven't been able to figure out how it works. All I can say for sure is that it reacts to magic. Badly, most of the time. Several mages were hurt attempting to cast spells at it. It's at the bottom of the ruins, if you wish to try your luck. Be careful, though, it could be quite hazardous to your health. Best to play it safe. No complex magic. Stick to basic spells with single effects. It's not worth taking unnecessary risks." and "It's connected to the rest of the chamber, we know that much. We just don't know how it works. I've given up trying to figure it out. It's just beyond us. I don't know why Denel stays down there. I have no idea. He's just asking to get killed." She will end every conversation with a depressing remark: "What a waste of my talents..." She is willing to give you information you may need: "If there's anything about Vahtacen you need explained, let me know. I'll help if I can." After speaking to Denel she will have a very negative response: "I don't know why Denel's even trying. This is doomed to fail. But fine. If he wants it, he can have it. It's just one more thing I'll get blamed for in the end." She will then give you the book to decipher the markings. Once you have unlocked the pillar, she will hate being interrupted from her busy wandering: "What do you want now?" She will ask you: "Have you found anything interesting in the ruins?" Once you tell her about the pillar, it's a different matter: "You made it work? That's fantastic! Not only can I tell Irlav, we're back on track, but I can happily say we did it without his help! There must be something down there worth locking up. Would you mind taking a look, as long as you're here? If I can send you back with something worthwhile, Irlav may forget all about the delays." Once you have obtained the Ancient Elven Helm from the ruins, Skaleel will be intrigued: "What's that you have there?" That looks important, whatever it is. I think you've really found something! You'd best get that to Irlav back at the Imperial City as soon as possible. He'll want the mages there to examine it more closely." She will urge you to be swift: "Get that artifact back to Irlav at the Arcane University. He's in a better position to study it than I am. Or to assign someone else to do it..."

Further into the ruin, her associate Denel is getting more than a bit tired of her bickering: "Skaleel might have a book that would be useful, but she's been sulking over the way Irlav's been treating her" and "I've given up trying to deal with her for now."