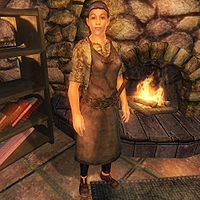 Tertia Viducia is an Imperial smith and the proprietor of The March Rider in Cheydinhal. She sells weapons and armor and offers repair services. The unique Captain Kordan's Saber can only be purchased here.

Like most other merchants in Cyrodiil, she lives a life of hard work and very little spare time. She sleeps in the locked room above the shop every night between midnight and 6am. After waking up, she heads downstairs and heats up the forge for another day of hard work. She unlocks the door at 8am and spends the next twelve hours offering her various services to customers. At 8pm, she locks up and heads outside for a breath of fresh air, preferably in the area near Willow Bank. At 10pm, she heads back to The March Rider and eats a late dinner before her bedtime at midnight. On rainy days, she will skip her 8pm walk and just stay inside the shop.

Tertia's clothing reflects her profession: a pair of blacksmith's pants and a blacksmith's apron as well as a pair of rough leather shoes. She wields an iron mace and carries around the shop key and a small amount of gold.

When you enter The March Rider for the first time, she will politely introduce herself and her services: "The March Rider sells and repairs weapons and armor. Can I help you? I'm Tertia Viducia." And if you ask her about Cheydinhal, she will change the subject completely and provide you with some useful information: "Did you know we have the finest horses in Cyrodiil, right here in town? Black Waterside Stables... the best thoroughbred blacks."

The citizens of Cheydinhal are proud of their resident smith and will recommend that you pay her a visit. "I think Tertia Viducia has a good supply of light armor." and "If you're looking for armor, you should speak with Tertia Viducia" are some of the commendatory remarks they will give you.