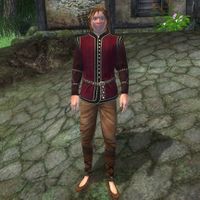 Philip Franc is a Breton hunter living in Blankenmarch.

Like the other two residents of the village, Philip lives a relatively peaceful existence. After waking up at 6am, he leaves his house and then spends the rest of the day wandering around town, at times engaging in conversation with neighbors Floyd Nathans and Hanz gro-Hubrag. He eats dinner back in his house at 8pm and then heads for bed at 10pm.

He carries a leveled bow and a leveled set of arrows, both of which can be enchanted. He wears randomly selected middle-class clothing and carries a bottle of either beer, ale, or cheap wine as well as a small amount of gold.