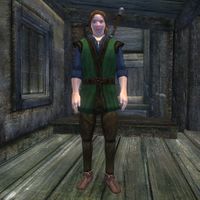 Floyd Nathans is a Breton bard living in the quiet village of Blankenmarch.

Like the other inhabitants of the village, he lives a very quiet existence. At 6am, he gets out of bed, exits the house, and spends the rest of the day walking around outside, occasionally talking with his neighbors, Hanz gro-Hubrag and Philip Franc. At 8pm, he re-enters his house, where he sits down at the table for a two hour meal before going to bed at 10pm.

Floyd wears randomly chosen middle-class clothing and carries a bottle of ale, beer, or cheap wine as well as a leveled amount of gold. In combat, he relies on a leveled longsword or two-handed blade of the best possible quality and either a Chameleon, Invisibility or Silence spell.