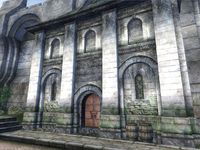 Ontus Vanin's House is located on the lower section of the western wall in the Talos Plaza District.

The dining table has on it four beef steaks, fourteen radishes, and three bottles of mead. The pantry behind the table holds more food, and next to it on the floor are two pumpkins and a watermelon. On the other side of the pantry is a food preparation surface with another two beef steaks on it. There are also two flour sacks on the floor. The stairs leading to his private quarters has a weapons chest at the foot of it. His private quarters holds little of interest. The wardrobe on the western wall holds random upper-class clothing and there is a clutter chest next to it. On top of the cupboard at the foot of his bed is a locked jewelry box. The coffee table has nine blackberries in a silver bowl and two bottles of beer. Ontus' desk has a bottle of cheap wine on it as well as a copy of Frontier, Conquest. In the alcove behind his stairs are some clutter crates and his chest which is a target in the Thieves Guild quest Misdirection. His basement holds only the standard clutter crates.