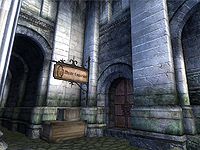 The Mystic Emporium is a magic and alchemy store located in the Market District of the Imperial City. It is found across the street from Edgar's Discount Spells and next to Divine Elegance and Slash 'N Smash.

The proprietor, Calindil, has 1000 gold and a Mercantile skill of 60. When bartering, he buys weapons, armor, books, and magic and miscellaneous items. In turn he will sell you scrolls, soul gems, spells, and a strangely wide range of non-random magic items which include the unique Hands of the Atronach. Two guaranteed magic items, the Feather Shoes and Fortify Fatigue Pants, are also on display in the store.

If you have installed the Wizard's Tower official download, Aurelinwae is added to the store. She has 2000 gold and a Mercantile skill of 6, which makes her a very useful merchant. She also offers recharging services. When bartering, she will buy your ingredients, potions, alchemy apparatus, books, and magic and miscellaneous items. In turn, she will sell you ingredients, potions, and soul gems, as well as all the upgrades for Frostcrag Spire. 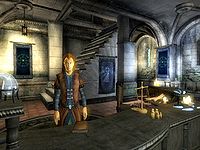 The main trading room is located on the ground floor and consists of a counter and a display of alchemy apparatus, scrolls, soul gems, and books. The room is spacious and dimly lit by several candles even though some natural lighting breaks through many of the windows. The front door opens to the sight of the huge counter where Calindil can be found every day between 8am and 8pm. On a small podium, there's a novice alembic and next to that, there is a copy of a Mysticism skill book, namely Hannibal Traven's The Black Arts on Trial. Following the desk, past some scales and weights, are seven soul gems on display—five petty, one lesser, and one common—and two novice mortar and pestles and a calcinator.

At the end of the counter, a writing desk contains clutter and the occasional book, but there are two retorts sitting on top, as well as two scrolls: one absorb skill: Conjuration and one absorb willpower. Also on display are a handbill from the Mystic Emporium and a shopping list.

In the northeastern corner, a table holds a pair of fortify fatigue pants and feather shoes, both of which become legally available when your Mercantile skill reaches 50. Also, arranged around a podium, there are more soul gems, six petty and two lesser. Rounding off, there are three copies of Fundaments of Alchemy. On the next table sit six magical scrolls: beguiling touch, flare, damage fatigue, serenity, another one of absorb willpower, and a scroll of absorb skill: Conjuration. Against the southern wall, behind the desk, a set of shelves reveals six scrolls, which incidentally hold the exact same magic powers as those on the table. 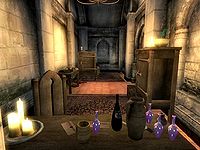 The private quarters consist of two rooms separated by a wooden door, which makes a dining area and a bedroom. Next to the door, some shelves hold three flawed rubies, a copy of Azura and the Box, as well as some more common books and clutter. Following the wall, a small dining table reveals two apples and a bottle of cheap wine. The cupboard opposite the wooden door contains food while the chest (a safe container) in the alcove has a chance of some silverware and gold. The cupboard here contains clutter, as does the sack on the floor, while the sack on top of the cupboard holds clothing. These two sacks do not respawn. Opposite the alcove, a well-provided dinner table holds two bottles of cheap wine, two bottles of ale, two loaves of bread, two tomatoes, and three potatoes. If the Wizard's Tower official download is installed, this room gains a bed in the northeastern corner for Aurelinwae. To make room for it, the chest is moved into the southern room, next to the food cupboard.

Behind the wooden door, in the southeastern corner, is a single bed where Calindil sleeps. In a nearby corner is a pair of thick cowhide shoes. The cupboard at the foot of the bed holds only clutter, while a few pieces of spare clothing lie scattered in front of it; a pair of burgundy linens, a burgundy linen shirt, a brown Shirt, and a blue & green outfit. The unlocked chest next to the door holds up to three pieces of iron, steel, or chainmmail armor. This is another safe container. The cupboard only holds clutter, but on top of it, a Nirnroot makes a chiming sound.

The worktable in the northern part of the room holds three weak potions of chameleon, a Cyrodilic Brandy and a bottle of Tamika's West Weald Wine. There's also a heartbroken letter, a potion recipe for cure disease and one for cure poison. 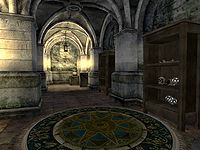 Halfway down the stairs, on the landing, is a cupboard with clutter and a chance of some gold. In the basement area, along the western wall, here are three open sacks with food and a closed one with clutter and a chance of some more gold. On the floor sits a pumpkin, and on a table two watermelons. The next shelves hold clutter, as does the cupboard, with a chance of a lockpick. The sack on the floor contains food. In the northeastern corner, a barrel holds clutter and/or a torch and the two crates in the opposite corner both hold clutter with a chance of either gold or a repair hammer. The big sack on top of the smaller barrel holds food. The shelves near the stairs have some skulls and bones on display, while the next set of shelves has a few alchemical ingredients: two samples of arrowroot, two samples of aloe vera leaves, and one of frost salts, as well as a Guide to Bruma.

All sacks in the basement are safe containers.

"Calindil runs a nice place at the Mystic Emporium."
"If you need something enchanted, Calindil has the goods."
"Do you ever buy soul gems from Calindil?"