Frostcrag Spire is a tower east of Bruma that serves as a home for magic-oriented characters (download-specific).

The tower is added by the Wizard's Tower official download. It can be reached by fast travel or by following an unmarked road that leads from Bruma to Cheydinhal. It becomes your property when the download is installed or when you exit the sewers after the tutorial, whichever is later. The accompanying quest is simply to buy upgrades.

Without upgrading, you've basically got Cyrodiil's highest altitude alchemy garden and portals to all of the Mages Guild Halls. The tower's real benefits only become available when you can start to afford some of the upgrades (which will cost more than the base prices once haggling is taken into account).

More details are available on the houses page. 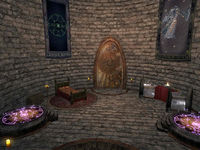 The living area with the alchemy lab on the right

The Altar of Alchemy is located upstairs in the living area. The altar was created by the spire's original owner, Taris Rendil, and Sinderion, the master alchemist of Skingrad. It grants you the ability Alchemical Brilliance, which temporarily boosts your Alchemy skill by 15 points when you are standing near it. This is the only Fortify Alchemy effect in the entire game that actually works, i.e., it really does allow you to produce more powerful potions and poisons. (The difference between this effect and all other effects is that it is implemented as an ability rather than a spell effect; abilities modify a skill's base value not just its current value). Even with Alchemical Brilliance, your maximum effective Alchemy skill level is 100 (i.e., although your skills page may say 115, the potions will be identical to those that you brew when your skills page says 100). It also grants you the next mastery perk if the buff happens to spill over (i.e., with an alchemy skill of 85, Alchemical Brilliance will raise your Alchemy skill to 100, and grant you the corresponding mastery perk). If it raises you up to or beyond 100, you will receive no experience for any potions you create. The Altar also contains Apprentice level alchemy apparatus, which can be very useful for low-level characters. In addition, a small bookshelf is added in the living area which contains a copy of A Game at Dinner, one of the Alchemy skill books. 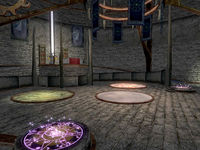 Bookcases around the walls of the entry hall

Purchasing the library upgrade will provide you with a large collection of books located in the main level.

The vault is a nice place to store your precious equipment; it is accessed using a portal in the main room. Once you purchase the vault upgrade, it contains chests, barrels and crates (all safe) as well as a nice collection of fine wines, including 1 bottle of Surilie vintage 399, 2 bottles of Tamika vintage 399, and a bottle of Shadowbanish wine. Your treasure is guarded by seven friendly Imps known as Vault Guardians. 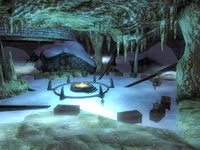 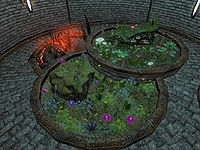 This garden, located in an upstairs room adjacent to the living area, is present even without buying any upgrades. Many kinds of flora from Tamriel and Oblivion are grown and can be harvested for their Alchemy ingredients. Several particularly rare specimens are present:

The portals to the guild halls

On an outside balcony, accessed from a door in the upstairs living area, you will find teleportation portals to all the Mages Guilds in Cyrodiil including the Arcane University. These portals will transport you to the first floor inside each Mages Guild. The trip is instantaneous in game-time, allowing much faster traveling to places throughout Cyrodiil. Be aware that there are no portals in the guild halls, so returning to Frostcrag Spire will require standard travel methods. Although horses do not technically use the portal, your current horse (if any) is transported to the destination city's stables at the same time.

The Kvatch Mages Guild also has a portal, but it is inoperable, since that guild was destroyed. If you try to use the Kvatch portal, a message will appear saying: The Kvatch guild hall is no more. 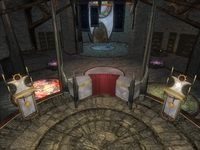 Your altars at Frostcrag Spire

This altar is found in the main room on the first floor. In order to make it functional, you must first buy a box of Magetallow Candles and add them to the altar. It is then equivalent in function to any of the Altars of Spellmaking at the Arcane University.

This altar is found in the main room on the first floor. In order to make it functional, you must first buy a box of Magetallow Candles and add them to the altar. It is then equivalent in function to any of the Altars of Enchanting at the Arcane University.

This altar is found in the main room on the first floor. It allows you to summon a permanent companion atronach, who will listen to your commands. You can summon a Flame, Frost, or Storm Atronach, by sacrificing three Fire, Frost, or Void Salts, respectively. 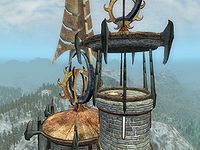 The viewing platform at the very top of the spire 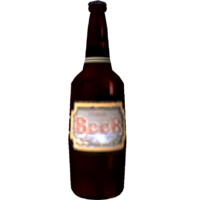 Do not miss the jewelry box! It is located in the living area on top of the small bookcase. You have to buy everything to get the jewelry box, including the candles. However, once you do, you'll be pleased to see the ring Pentamagic Loop.