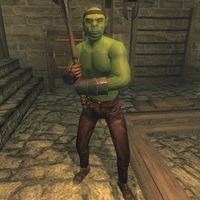 Lum gro-Baroth is an Orc warrior living in Chorrol. He can be found most often at the Fighters Guild, but unlike his brother Kurz, he is not a member. He offers advanced training in Block.

The Fighters Guild have allowed him to sleep near the training facilities in the basement, and he will do that every night between midnight and 6am. Immediately after waking up, he draws his warhammer and spends two hours practicing with the training dummy near his bedroll. He heads outside at 8am and spends the rest of the morning practicing his archery skills on the targets behind the guildhall. He heads back into the basement at midday and eats a two-hour lunch before it is time to train once again; an exhausting sparring session against Sabine Laul near her forge in the basement. Sabine leaves him at 6pm and Lum then enjoys a two-hour dinner before using his warhammer on the dummy until his bedtime at midnight. He will offer services at all times except when eating or sleeping.

A true candidate for membership in the Guild, Lum carries his iron bow, iron warhammer, and a single iron arrow. He wears iron gauntlets, a pair of laced leather pants and rough leather shoes. He also possesses the key to the Guildhall, a piece of mutton and a small amount of gold.

When you meet him for the first time he will introduce himself and claim that he differs from his brother at one particular point: "I'm Lum gro-Baroth. The cheerful one. My brother, Kurz? He's not so cheerful." When asked about Chorrol he will provide some revealing facts about Orcs: "Dogs are an orc's best friend. Good protection, good companions, good eats. The Bruiants have dogs. Lots of 'em." As an advanced trainer, Lum can give you the necessary reference to start the Block Training quest. When you have a Block skill of 70 or above, he will point you towards Andragil in Bravil: "If you need more training, you'd better head to Bravil and track down Andragil. She taught me a few things I didn't know."

Members of the Fighters Guild outside of Chorrol can be heard asking if Lum provides Block training: "Lum gro-Baroth in Chorrol can train me in shield work, right?"